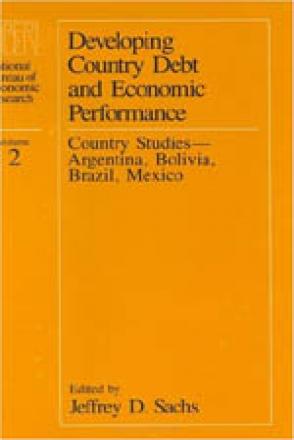 For dozens of developing countries, the financial upheavals of the 1980s have set back economic development by a decade or more. Poverty in those countries has intensified as they struggle under the burden of an enormous external debt. In 1988, more than six years after the onset of the crisis, almost all the debtor countries were still unable to borrow in the international capital markets on normal terms. Moreover, the world financial system has been disrupted by the prospect of widespread defaults on those debts. Because of the urgency of the present crisis, and because similar crises have recurred intermittently for at least 175 years, it is important to understand the fundamental features of the international macroeconomy and global financial markets that have contributed to this repeated instability.
This project on developing country debt, undertaken by the National Bureau of Economic Research, provides a detailed analysis of the ongoing developing country debt crisis. The project focuses on the middle-income developing countries, particularly those in Latin America and East Asia, although many lessons of the study should apply as well to other, poorer debtor countries. The project analyzes the crisis from two perspectives, that of the international financial system as a whole (volume 1) and that of individual debtor countries (volumes 2 and 3).
This second volume contains lengthy and detailed case studies of four Latin American nations—Argentina, Bolivia, Brazil, and Mexico—providing a wealth of comparative data and new statistics on the general economic development of each nation. The authors explore the various factors that contributed to the debt crisis in each country and analyze how the crisis was managed once it had taken hold. Trenchant economic analyses are enhanced by assessments of the stark political realities behind the policy choices facing each nation.