Clashing over Commerce: A History of US Trade Policy 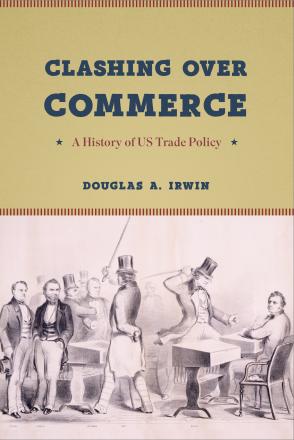 Should the United States be open to commerce with other countries, or should it protect domestic industries from foreign competition? This question has been the source of bitter political conflict throughout American history. Such conflict was inevitable, James Madison argued in The Federalist Papers, because trade policy involves clashing economic interests. The struggle between the winners and losers from trade has always been fierce because dollars and jobs are at stake: depending on what policy is chosen, some industries, farmers, and workers will prosper, while others will suffer.
This comprehensive history of US trade policy to date offers a clear picture of the various economic and political forces that have shaped it. From the start, trade policy divided the nation—first when Thomas Jefferson declared an embargo on all foreign trade and then when South Carolina threatened to secede from the Union over excessive taxes on imports. The Civil War saw a shift toward protectionism, which then came under constant political attack. Then, controversy over the Smoot-Hawley tariff during the Great Depression led to a policy shift toward freer trade, involving trade agreements that eventually produced the World Trade Organization. Irwin makes sense of this turbulent history by showing how different economic interests tend to be grouped geographically, meaning that every proposed policy change found ready champions and opponents in Congress.