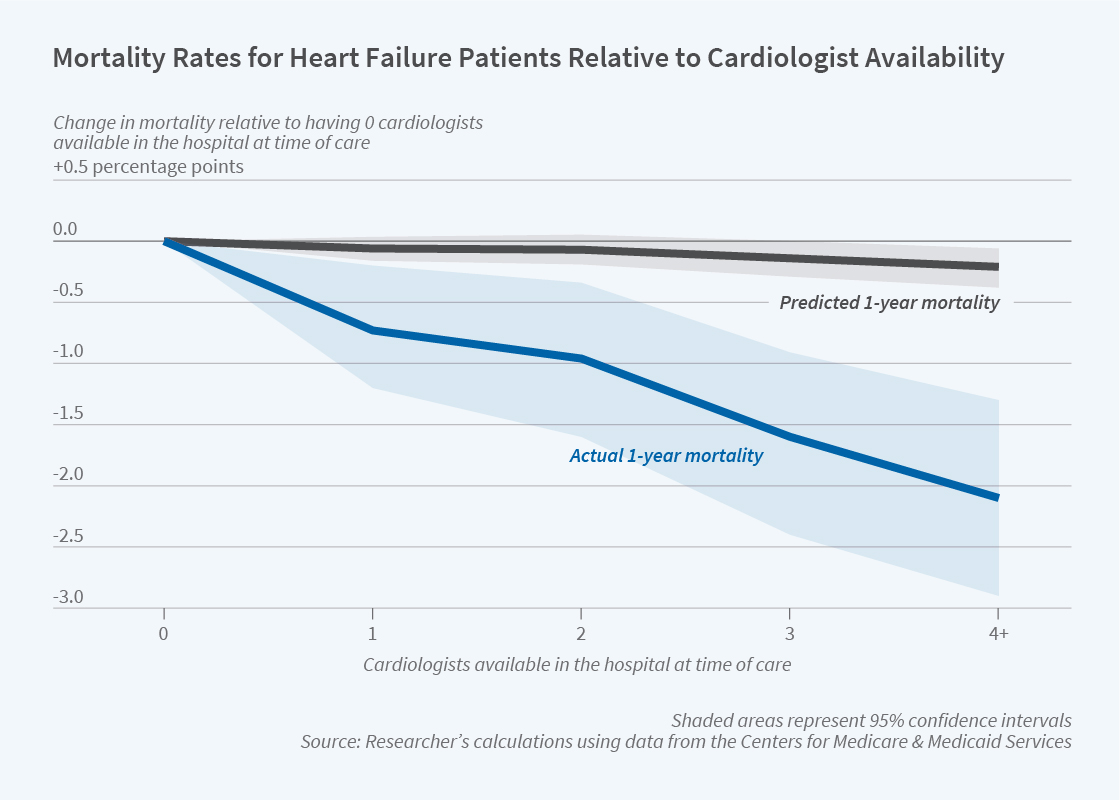 Health care provided by specialists is associated with greater treatment intensity than health care by general practitioners, raising questions about the costs and benefits of the additional care. Researcher Joseph J. Doyle, Jr., in Physician Characteristics and Patient Survival: Evidence from Physician Availability (NBER Working Paper 27458), presents evidence that substantiates the higher costs of care by specialists, and shows that this care by specialists benefits patients through reduced mortality.

Doyle’s research focuses on Medicare beneficiaries who were admitted to the hospital through the emergency department with heart failure — the most common reason for this type of hospital admission. The analysis brings together data on the patients’ health care from Medicare claims, mortality from Vital Statistics, and physician characteristics from the American Medical Association’s Masterfile.

Doyle circumvents this concern by focusing on variation in cardiologist treatment that arises solely from day-to-day differences in the staffing mix within a hospital. On average, there are two cardiologists available on the date of admission for patients as observed in the sample, but the exact number varies considerably within hospitals. Thirty-four percent of the patients are admitted on a day when no cardiologists are available at their hospital, while nearly 20 percent are admitted on a day when four or more are available.

The analysis compares patients admitted on different dates, but to the same hospital during the same calendar quarter and on the same day of the week. The key assumption is that any variation in staffing across those dates is not related to patient characteristics. Indeed the data support that premise, with nearly identical observable patient characteristics across different levels of cardiologist availability, including patient age, sex, and prior-year healthcare spending.

The statistical analysis indicates that increasing the number of available cardiologists from zero to two or more results in a 1.2 percentage point reduction in mortality. Doyle infers that specialty care is cost-effective for these patients, with an estimated cost of saving at least one year of life — calculated under strong assumptions — of approximately $50,000.

Doyle extends the analysis of heart failure patients to six other common causes of emergency admissions for Medicare patients, such as strokes and hip fractures. Greater availability of the specialists who are most relevant to these diagnoses is associated with reduced one-year mortality for five out of the six diagnoses. That is, the results for heart failure patients appear to be more broadly applicable. Doyle concludes that Medicare beneficiaries “admitted with common emergency conditions appear to benefit from the availability of specialists.”

The researcher acknowledges support from the National Institutes of Health (Grant R01 AG41794).