The Benefits of Recent Medical Treatment Changes Have Outweighed Their Costs 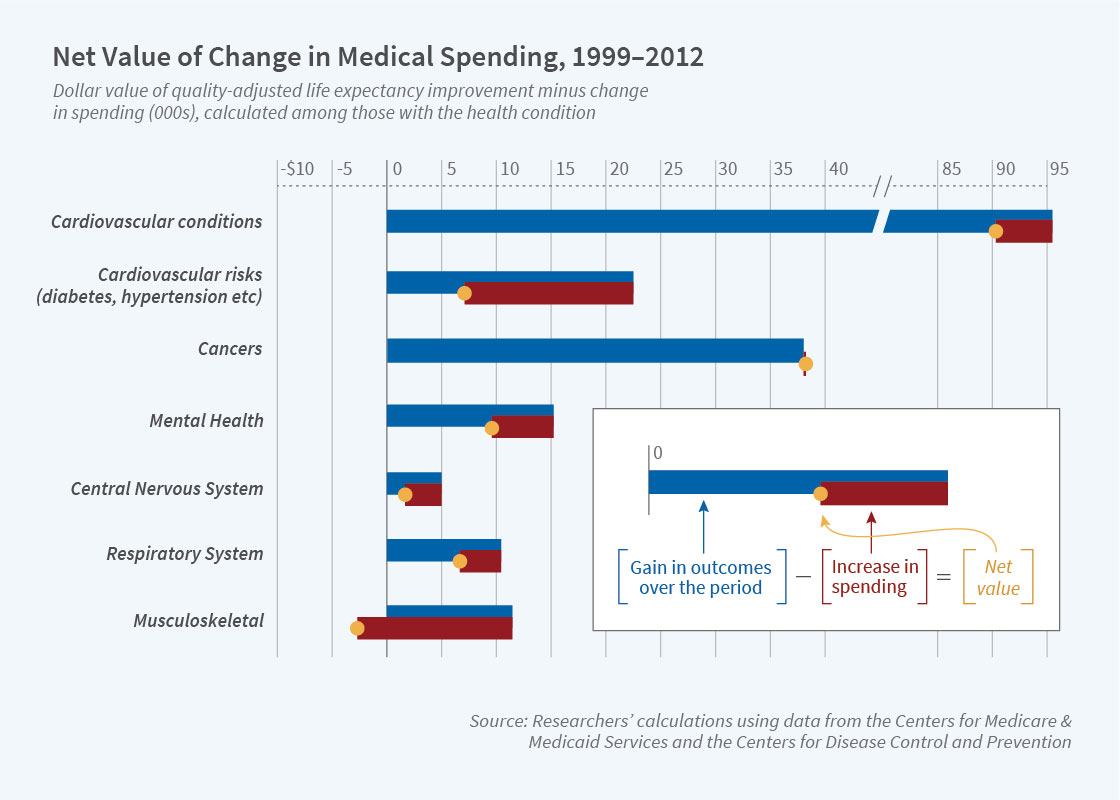 As health care costs continue to grow in the United States, a crucial question is whether the increased spending is productive. Traditional measures — such as those in the National Income and Product Accounts (NIPA) — indicate that health care productivity has declined in recent decades. However, this traditional accounting suffers from an important shortcoming: it does not directly measure health improvement as the primary outcome.

This research improves on existing measures of health care productivity along several key dimensions. First, unlike traditional approaches, it quantifies the primary output of medical care: improved health. Second, it treats each medical condition as an industry, instead of treating each type of provider as an industry. This condition-based approach reflects the idea that patients care primarily about their health and the costs of treating a condition, rather than the specific type of treatment. This approach better captures the productivity gains that occur when a new therapy, such as a pharmaceutical drug, reduces use of an older treatment by a different type of provider, such as inpatient surgical care.

To estimate health care productivity, the researchers measure spending, mortality, and quality of life for elderly patients with each of 80 prevalent conditions for every year from 1999 to 2012. They draw on numerous data sources and develop new methods to attribute changes in spending and health outcomes to specific medical conditions, even when patients have more than one condition.

The value of the benefits of medical care increased by $113,000 per capita over this 13-year period. The implied increase in medical care productivity is 21 percent, or 1.5 percent per year.

Health, in these accounts, is measured by quality-adjusted life expectancy at age 65. The researchers use Vital Statistics data to calculate life expectancy, and they use survey data about health-related limitations of physical abilities and social interactions to adjust for quality of life.

Over the same time period, health care costs have also risen. Annual spending increased by about $4,800 per person over the age of 65. Changes in treatment and increased disease prevalence both contributed to this cost growth. Sixty percent of the additional cost is attributable to changes in treatment, while the remainder is due to higher disease incidence. Projecting the costs attributable to treatment over a lifetime, the researchers estimate an overall cost increase of $58,000 per person between 1999 and 2012.

The researchers report considerable heterogeneity in productivity growth across conditions. This is shown in the figure. Health care for cardiovascular disease (CVD) has been especially productive. Quality-adjusted life expectancy for patients with CVD increased by nearly a full year, while the present value of lifetime costs rose by only $5,157. Other conditions with particularly strong productivity growth include colorectal cancer, lung cancer, and acute kidney injury.

The figure also shows that musculoskeletal conditions were among the few conditions with negative productivity growth during this period, a phenomenon that the researchers attribute in part to the expanded use of opioids. They note that opioids are expensive but do not appear very effective in reducing chronic pain.

The differences in productivity growth across conditions suggest scope for improving the efficiency of health care resource use. Overall, however, the researchers conclude that increased medical spending over the 1999–2012 period generated benefits in quality-adjusted life expectancy that outweighed the financial costs.