The Enduring Impacts of OxyContin Reformulation 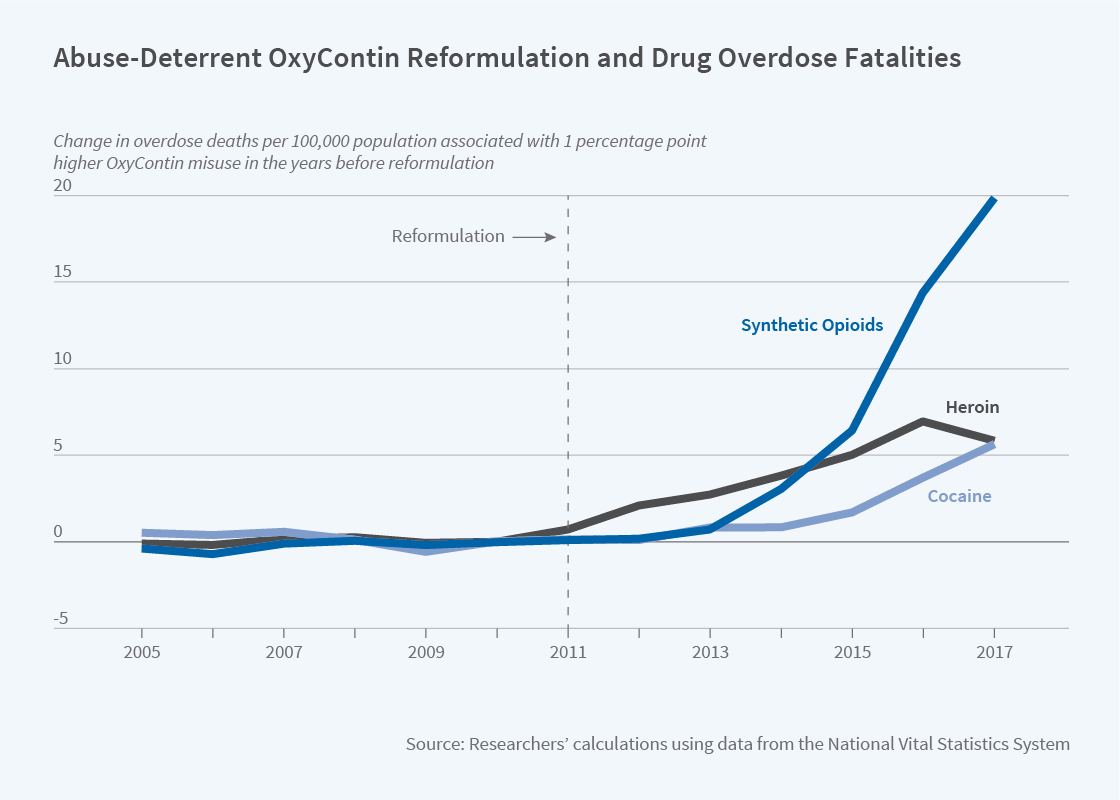 Fatal drug overdoses in the United States have risen dramatically in the past decade, but the trend has been far worse in some states than in others. Between 2009 and 2017, the growth of fatal overdoses was 27 per 100,000 residents in the 10 most severely affected states, in contrast to less than one per 100,000 residents in the 10 least affected states. What explains this geographic dispersion in the growth of overdose deaths?

The reformulation of OxyContin had the unintended consequence of increasing overall overdose rates in locations where OxyContin had initially been misused.

In The Evolving Consequences of OxyContin Reformulation on Drug Overdoses (NBER Working Paper 26988), researchers David Powell and Rosalie Liccardo Pacula trace the geographic differences in fatal drug overdose patterns to heterogeneous impacts of the 2010 reformulation of the prescription opioid OxyContin.

OxyContin, a brand-name, long-acting formulation of oxycodone, was first marketed as a pain reliever in 1996. It was intended to gradually deliver pain relief over a 12-hour period but, in its original formulation, the pill could be crushed or dissolved to immediately release the entire dose. In response to concerns about widespread abuse of the drug, its manufacturer introduced a new, abuse-deterrent version — and stopped distributing the original version — in 2010.

The goal of reformulation was to reduce the initiation of opioid misuse and, as a result, decrease opioid-related overdoses. However, the reformulation could have instead increased the risk of overdoses, by interrupting the supply of abusable prescription opioids and inducing some OxyContin abusers to switch to illicit opioids.

The researchers use National Vital Statistics System data from 1999 to 2017 to assess the impact of OxyContin reformulation on drug overdoses. In their analysis of fatal overdoses, they assume that any impact of the OxyContin reformulation should be greater in states with higher initial rates of OxyContin misuse. Misuse rates among the teenaged and adult population varied substantially across states, ranging from 0.26 percent in Illinois to 1.15 percent in Rhode Island, according to data from the National Survey on Drug Use and Health.

The researchers verify that initial misuse of other types of prescription pain relievers does not predict the growth in overdose rates. This finding confirms that the geographic variation in the growth of fatal overdoses beginning in 2010 is attributable to OxyContin’s reformulation, not to broader trends in the abuse of opioids.

The findings indicate that the reformulation of OxyContin had the unintended consequence of increasing overall overdose rates in locations where OxyContin had initially been misused. The researchers infer that the reformulation spurred an expansion in illicit drug markets in those locations, leading – over the past decade – to a net increase in death rates from heroin, fentanyl and cocaine.

The Evolving Consequences of OxyContin Reformulation on Drug Overdoses