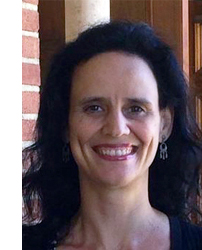 Adriana Lleras-Muney is a research associate in the NBER’s programs on Aging, Children, Health Care, and Health Economics.  She is a professor of economics at the University of California at Los Angeles, where she teaches public finance and population economics.

Lleras-Muney is currently an elected member of the Executive Committee of the American Economic Association, serving as the liaison to the newly appointed ombudsperson.  She is an associate editor of the Journal of Health Economics, and is on the editorial boards for Demography and the American Economic Journal - Economic Policy.  Lleras-Muney previously served as a permanent member of the Social Sciences and Population Studies Study Section at the National Institutes of Health.  In 2017, she was recognized with a Presidential Early Career Award for Scientists and Engineers.

Her research focuses on understanding the relationship between socioeconomic status and health outcomes. Recent work has explored the emergence of a female advantage in life expectancy in the US, as well as the long-term impact of cash transfer programs on low-income children.  She is currently continuing her work exploring the long-term health effects of government policies in the early 20th century as well as further understanding the determinants of mortality.

After earning degrees in economics from Université de Paris IX – Dauphine and from Louisiana State University, Lleras-Muney earned her Ph.D. in economics with distinction from Columbia University.  She was on the faculty at Princeton University before joining the UCLA faculty in 2008.

When she is not working, she enjoys reading, dancing, and traveling with her daughters.