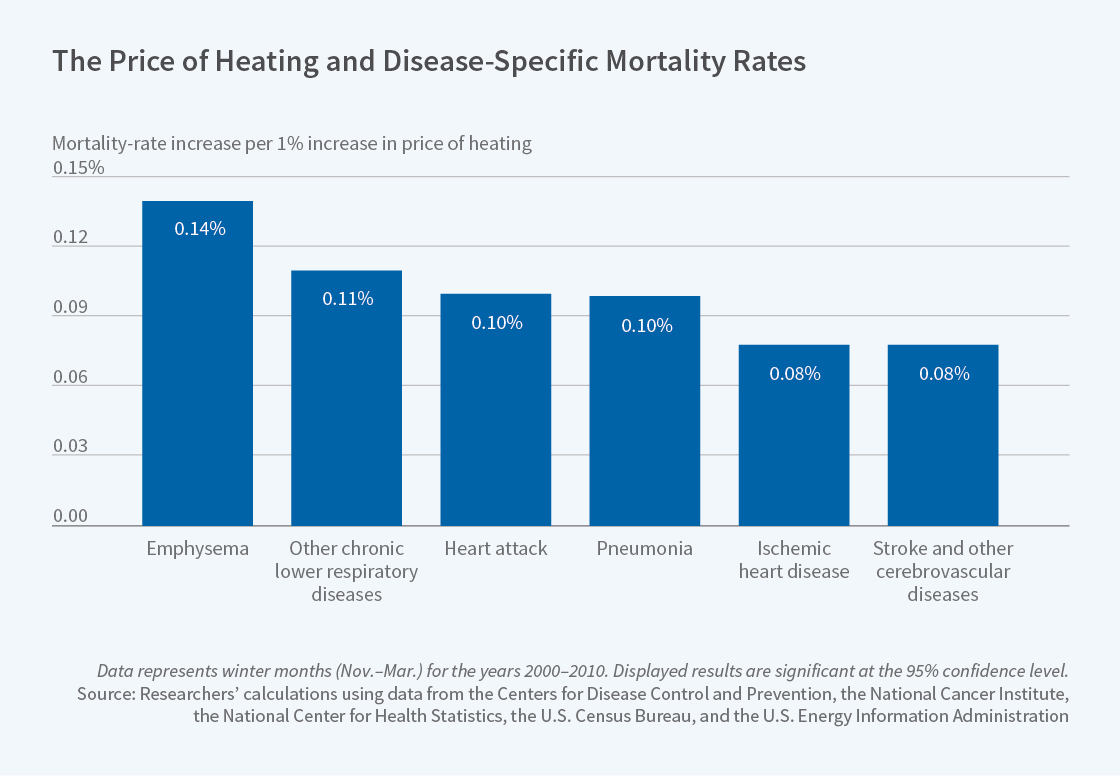 sld Death rates are known to be highest in winter months in areas with cold weather. In Inexpensive Heating Reduces Winter Mortality (NBER Working Paper 25681), researchers Janjala Chirakijja, Seema Jayachandran and Pinchuan Ong assess whether the cost of heating contributes to this “excess winter mortality.” High heating costs can present households with difficult tradeoffs: set their homes to uncomfortably low temperatures, or reduce their spending in other areas, such as food and medical care. Either type of response can potentially increase health risks.

The estimates imply that the lowered price of heating due to shale natural gas production and other factors in the late 2000s averted 11,000 winter deaths per year in areas that relied on this heating energy source.

The researchers examine the effects of heating costs in the contiguous United States using geographic variation in the prevalence of natural gas heating and changes over time in the relative prices of natural gas and electricity. Overall, 58 percent of households use natural gas and 30 percent use electricity, but there is substantial variation across counties in the primary source of energy for home heating. This variation is attributable to geographic differences such as access to natural gas pipelines and availability of hydroelectric power.

While electricity prices increased gradually between 2000 and 2010, natural gas prices have changed more dramatically. They increased in the early 2000s in response to supply disruptions from hurricanes on the Gulf Coast, and dropped later in the decade due to the boom in shale natural gas production.

Using this variation across counties and over time in heating prices, the researchers first examine the effects of prices on energy use. They find that households reduce their home energy use when prices increase, but not so much as to fully offset the price increase, so they are still exposed to higher energy bills.

To examine effects on mortality, the researchers use Vital Statistics data to identify causes of death that are particularly pronounced in winter, and rely on the same variation in home heating prices to identify the impact on age-adjusted mortality rates from these causes. They estimate that a 1 percent increase in heating prices causes a 0.057 percent increase in these causes of death, with larger estimated effects in lower-income counties. These estimates imply that the lowered price of heating due to shale natural gas production and other factors in the late 2000s averted 11,000 winter deaths per year in areas that relied on this heating energy source.

Several strategies are employed by the authors to test the sensitivity of their findings to alternative explanations. For example, they use the non-winter months as an additional comparison group, confirming that the price of heating affects mortality only in colder, winter months. They demonstrate, however, that, when the price of heating is lower, winter deaths are not merely shifted a short time later than they would have otherwise occurred. The researchers also find that the heating price seems to matter more when a place is unusually cold compared to its usual winters. This is likely due to less physiological adaptation to such temperatures by individuals and insufficient preparation of their homes (such as through increased insulation).

The researchers conclude that home heating prices have substantive effects on health, and that it is important to consider these effects when evaluating policies that affect home energy costs, particularly for low-income households.