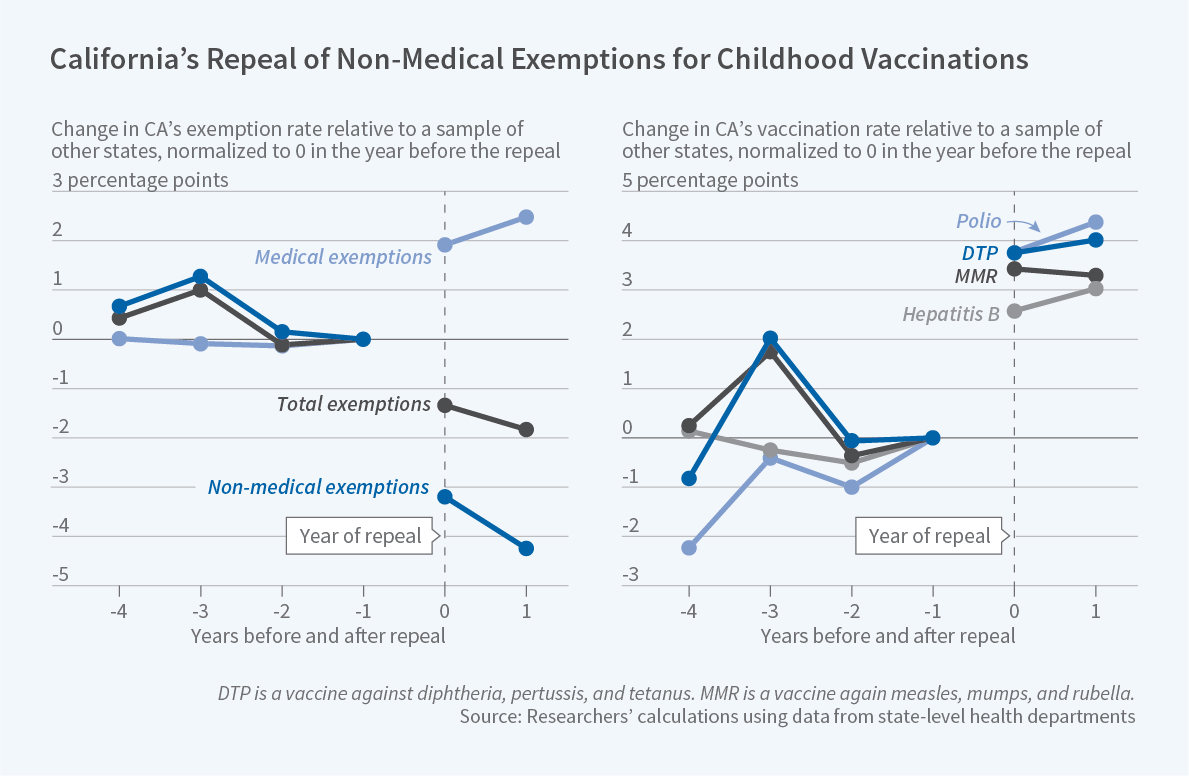 The recent outbreak of measles in the United States has highlighted the health risks associated with losing herd immunity. To minimize future outbreaks of vaccine-preventable infectious disease, some states have recently considered increasing the stringency of immunization requirements for children. In Do Stricter Immunization Laws Improve Coverage? Evidence from the Repeal of Non-medical Exemptions for School Mandated Vaccines (NBER Working Paper 25847), researchers Chelsea Richwine, Avi Dor and Ali Moghtaderi provide evidence on the efficacy of such efforts. Specifically, they examine California’s decision to eliminate all non-medical exemptions from childhood vaccine requirements beginning in 2016.

The policy change was associated with a statistically significant increase in vaccination rates against all eight of the infectious diseases, with estimates ranging from 2 to 5 percentage points.

Every state requires children to be immunized against at least eight vaccine-preventable, infectious diseases — including the measles — prior to public school entry. All states allow medical exemptions from this requirement for children whose health could be harmed by the vaccine. In addition, most states allow non-medical waivers for children whose parents have religious, philosophical, or personal objections to the vaccines. In response to a 2015 measles outbreak originating at Disneyland, however, California eliminated all non-medical exemptions, making it one of only three states that did not allow any such waivers. (Mississippi and West Virginia were the other two. In response to the recent measles outbreak, New York adopted a non-medical exemptions law in June 2019, and Maine will join these states when a recently-passed law takes effect in 2021.)

Prior to the policy change, California had higher overall exemption rates than the control states (5.7 percent vs. 2.6 percent), lower vaccination rates (92.7 percent vs. 97.0 percent, for Hepatitis B vaccines, for example), and higher rates of vaccine-preventable disease outbreaks (230 cases vs. 136 cases per 1 million population). Note that the exemption rates indicate the proportion of children with waivers for at least one of the vaccines, so they are not directly comparable to the vaccination rates against individual illnesses.

Overall, the researchers report that the policy change was associated with a statistically significant increase in vaccination rates against all eight of the infectious diseases, with estimates ranging from 2 to 5 percentage points. Thus, in spite of the offsetting increase in medical exemptions, the repeal of non-medical exemptions was effective in increasing vaccination rates.