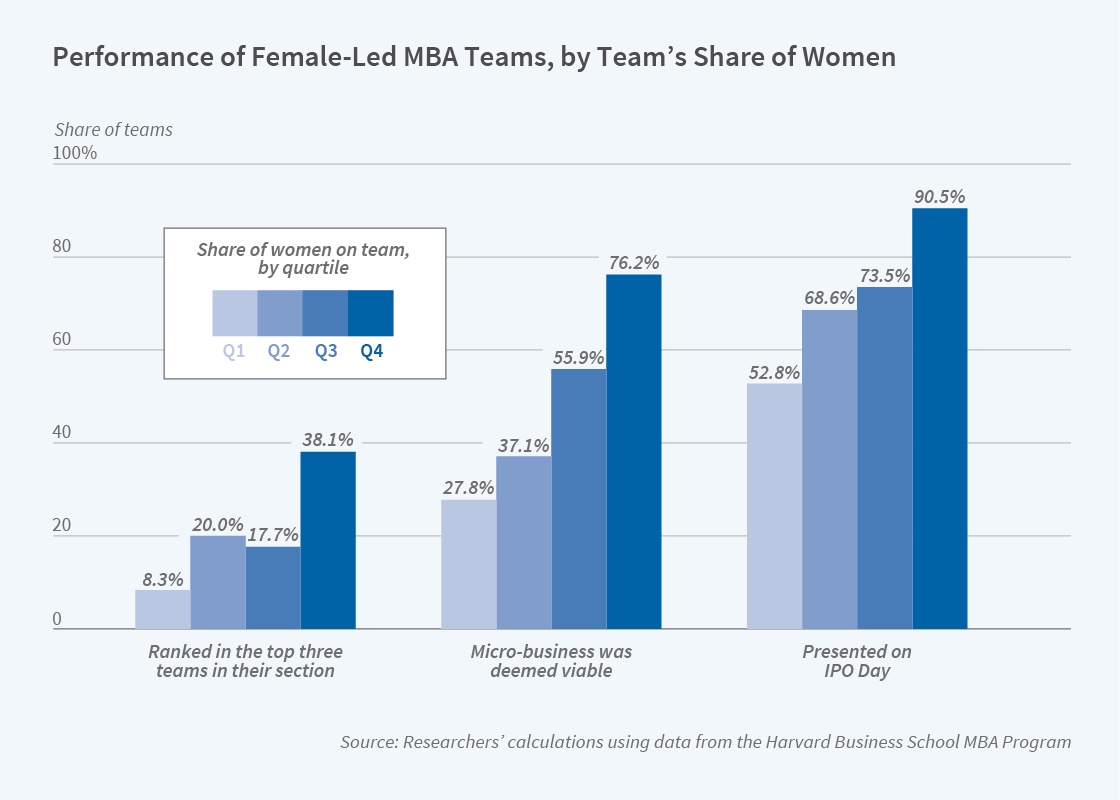 The researchers collect data from a course taken by all 3,684 first-year MBA students in the classes of 2013 to 2016. Over a semester, teams of five to seven students worked together to design and launch microbusinesses, which faculty mentors and judges evaluated at several stages. The faculty leader for each section of about 90 students identified completed projects to be presented to a panel of judges on “IPO Day” at the end of the semester. The judges determined whether the projects were viable businesses. They also chose the top three from each section of the class as well as the top three across all sections.

In 2013, HBS sought to facilitate team diversity by assigning teams via a computer algorithm. From 2014 through 2016, on the other hand, the school allowed students to form their own teams voluntarily without restriction. These different assignment mechanisms allowed the researchers to explore three key aspects of team diversity. First, by examining team sorting in the 2014–16 period, they assess the extent of homophily — the desire to associate with those who are “like us” — in endogenous team formation. Second, since teams were assigned exogenously in 2013, the data from that year can be used to test the causal impacts of diversity on team performance and to be compared to the estimates when teams are formed voluntarily. Lastly, since assignment of faculty members also was exogenous to student characteristics, the study estimates the performance impact of vertical diversity.

Teams with more women performed better when they had a female section leader. Ethnically diverse teams performed worse than homogenous teams, especially when diversity was assigned by algorithm.

In the 2014–16 period, the students showed strong homophily in team formation. Shared race, ethnicity, and gender each increased the chance that a given pair would match by about 25 percent. The students also selected into teams with common acquired traits, like shared educational and work experiences, but these effects were more muted: attending the same college and working in the same industry increased the likelihood of matching by 17 percent and 11 percent, respectively. Most forms of homophily were stronger among men.

Analyzing the data from 2013, the researchers find that when teams were set by algorithm, diversity significantly impaired team performance. Increasing a team’s racial and ethnic diversity by one standard deviation worsened its project’s performance rank by 18 percent while increasing a team’s educational diversity by one standard deviation worsened its rank by 5.2 percent. Teams on which the members shared both ethnicity and gender performed the strongest.

In contrast, in 2014 through 2016, when students formed their own teams, team diversity no longer translated into nearly as poor a performance as it did for the 2013 cohort: the estimated coefficient was reduced by 60 percent. These results suggest that the performance implication of diversity crucially depends on how the diversity is created: a forced assignment mechanism may particularly impede performance.

Teams with more female students performed significantly better when their section leader was a female faculty member. In contrast, gender commonalities between teams and end-of-semester project judges did not significantly affect team rankings. Since section leaders participate in teaching and advising students on their projects throughout the semester, the researchers suggest that gender ties with female section leaders may enhance mentorship during project development.

Diversity and Performance in Entrepreneurial Teams