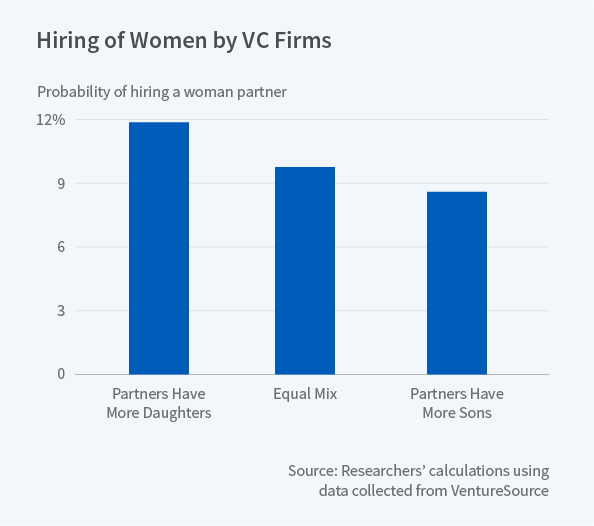 Firms at which senior partners had more daughters than sons hired more women partners and performed better than their competitors.

Only about 10 percent of new venture capital (VC) hires are women, despite higher female representation among MBAs and advanced degree holders in science and technology. Approximately 75 percent of venture capital firms have never had a senior investment professional who is a woman, and the percentage of venture capitalists who are women has not increased over the past 25 years.

In And the Children Shall Lead: Gender Diversity and Performance in Venture Capital (NBER Working Paper No. 23454), Paul A. Gompers and Sophie Q. Wang suggest that the proportion of daughters among the offspring of VC firms' senior partners is just such a variable. They demonstrate that this variable affects gender diversity at VC firms, then use this relationship in turn to study how diversity affects firm performance.

Prior research suggests that parents of daughters show greater support for feminist causes and gender equity, and that they make different decisions on gender-related questions. U.S. congressmen with more daughters, for example, are more likely to vote for legislation supported by women's groups. The researchers find a "daughter effect" in VC firms' hiring decisions. At firms whose senior partners had more daughters than sons, the female hiring rate was 11.87 percent; the rate was 9.78 percent at firms where senior partners had equal numbers of daughters and sons, and 8.68 percent where they had more sons than daughters. Other measures of the partners' children's gender mix, such as the ratio of daughters to sons among partners, the proportion of partners with more daughters than sons, and the share of partners with at least one daughter, were also correlated with hiring decisions.

Daughters over 12 years of age had a greater effect on hiring than younger daughters. "Older daughters may have more of an effect on the attitudes of their fathers," the researchers write. "This is consistent with fathers observing potential gender biases that their daughters face as they get older," and with senior partners having stronger influence in hiring decisions.

Firms whose partners had more daughters exhibited better performance than their competitors. For all VC firms in the researchers' sample, the probability that a deal resulted in an IPO or in an acquisition valued higher than the amount of capital invested was 28.7 percent. When a senior partner had one more daughter and one less son, a firm's deal success rate increased by about 2.9 percent. This "son for daughter swap" was also associated with a 3.2 percent higher net internal rate of return for the firm.

The researchers also investigated how the gender composition of partners' children, as well as the number of women partners at a firm, affected a firm's probability of investing in companies with female founders. These companies, they hypothesize, could be overlooked by less diverse investment firms, and might correspondingly yield higher returns. They did not find any evidence that firms at which the partners have more daughters increase their investment in woman-led companies, but they did find that firms with at least one female partner do so.

The researchers calculate that if the typical VC firm increased the fraction of female partners by 10 percentage points, from the current average of 8 percent to 18 percent, "this would translate into an additional $23.2 billion being raised."

And the Children Shall Lead: Gender Diversity and Performance in Venture Capital