Assessing the Importance of Key Personnel at Startup Firms 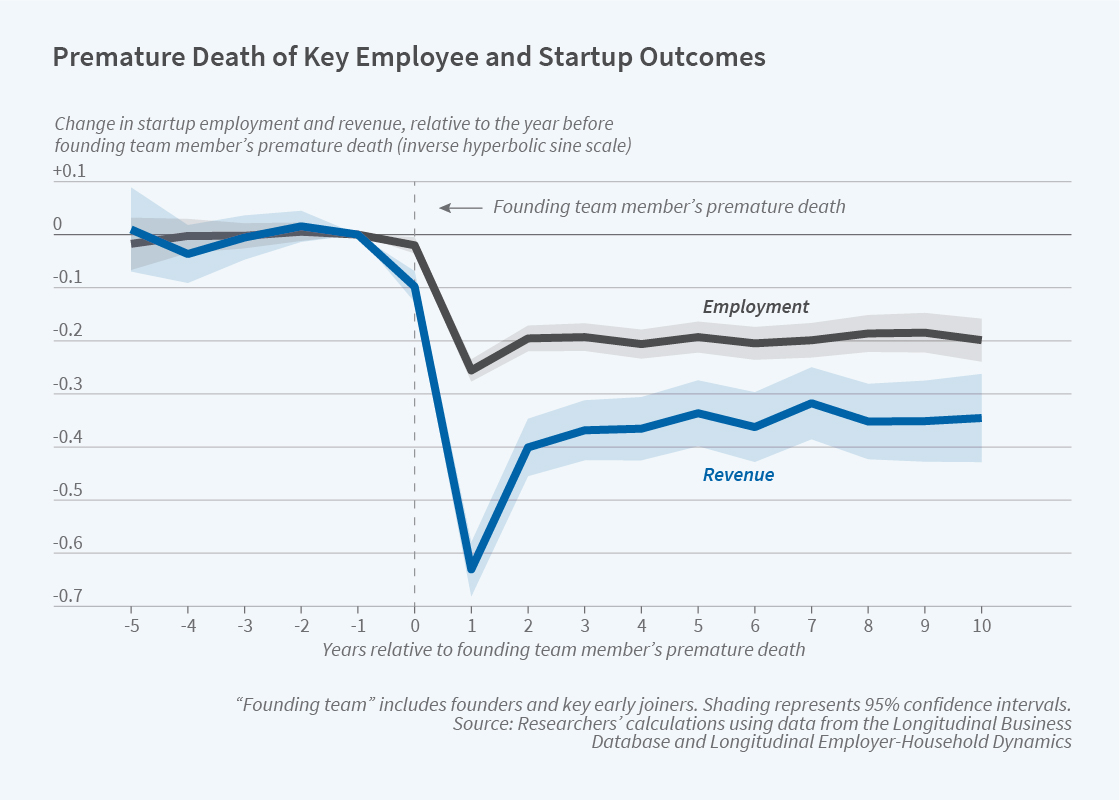 Just how important is the founding team to the success of a startup?  In "Founding Teams and Startup Performance" (NBER Working Paper 28417), Joonkyu Choi, Nathan Goldschlag, John C. Haltiwanger, and J. Daniel Kim attempt to answer that question by examining the impact of premature deaths of founders and other employees who joined new firms in the firms’ first year.

Their premise is that a startup’s prospects hinge largely on the organizational capital embedded in the members of the founding team. Such capital takes the form of expertise, established customer relationships, and entrepreneurial vision. The researchers find that premature deaths have a persistently large and negative effect on the survival, growth, and productivity of startups.

The passing of a founder or an important early joiner of a small startup is associated with lower employment, revenue, and labor productivity.

The study draws on data for all US startups with paid employees launched between 1990 and 2015 in the nonfarm sector. The analysis includes sole proprietorships and corporations, but excludes partnerships because their owners cannot pay themselves wages.

The researchers compare the performance of 25,000 startups that experienced a premature death of an early employee or founder with that of an equal number of “twin” startups — other young firms that are similar in business type, size, and demographic characteristics of the founding teams but that did not experience an untimely death. They find that the loss of a founding team member is associated with a 15 percent decline in employment, a 31 percent decline in revenue, and a 22 percent decline in labor productivity, measured by revenue generated per worker. The greatest impact occurs within a year of the death, but negative effects persist for at least a decade. Losing a founding team member reduces the chances of the firm’s survival. The impact on all outcome measures is much greater when a founder, rather than an early joiner, passes away. This suggests that organizational capital is disproportionately embodied in founders.

Reflecting the importance of relationship building, the loss of a founding member deals a particularly harsh blow to firms in the business-to-business (B2B) sector. The negative effect on revenue is 72 percent greater for B2B firms than for business-to-consumer firms; the employment hit is 38 percent greater.

An untimely death at a firm with a small founding team — five or fewer active members in the year prior to the loss — has twice as large a negative impact on employment and an even greater impact on revenue as a death of a key member of a firm with a larger founding team.

In general, startups are less likely to survive a premature death if the individual is a founding member with high human capital, where human capital is measured by the decedent’s full-quarter earnings prior to joining the firm.

The researchers report that their findings hold true across industries, a result that indicates “the importance of founding teams even outside of innovation-intensive industries.”