How the Aging Process Changed During the 20th Century 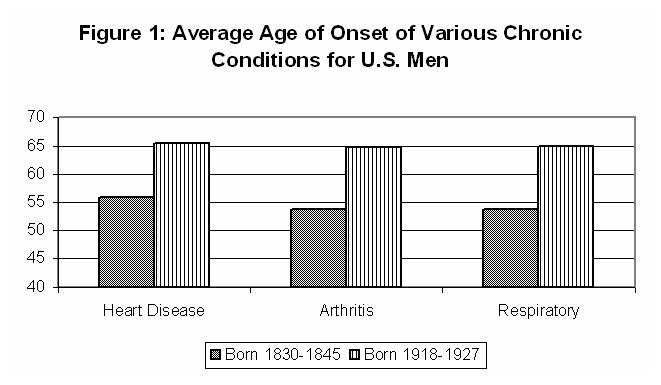 In 1986, an ambitious project was launched to study the aging process of Union Army veterans, the first cohort to turn 65 during the twentieth century. Funded by the National Institute on Aging, The Early Indicators of Later Work Levels, Disease and Death project was led by a diverse team of investigators, including economists, physicians, a demographer, and a biological anthropologist. After a data set was assembled linking vast amounts of information for a sample of Union Army veterans, it was compared with more recent data sets, yielding surprising insights about how the aging process has evolved during the past century.

In Changes in the Process of Aging During the Twentieth Century: Findings and Procedures of the Early Indicators Project (NBER Working Paper 9941), Robert Fogel reports on the process and remarkable findings of the project, which to date have filled some 90 published papers, books, and Ph.D. dissertations.

The starting point of the project was to assemble a data set linking together information from a dozen sources - including decennial censuses, military records, Union Army pension records, and death certificates, among others - for a large sample of 45,000 veterans. This was no small challenge - all told, it takes 15,000 variables to describe the life-cycle history of each veteran. The project team devoted most of their efforts during the first 15 years of the project to overcoming the technical, organization, and analytical obstacles to assembling the data.

Researchers are only beginning to reap the rewards of the compilation of this rich data source, but early analyses have already generated unexpected and important discoveries. Some of the most significant findings relate to the incidence of chronic diseases. Prior to this research, the conventional wisdom held that as life expectancy has increased over the past century, people have come to spend more years plagued by debilitating chronic illnesses. The Union Army data set has provided several interesting insights on this question.

First, it has demonstrated that chronic illnesses affected young and middle-aged men to a much greater degree in the past than today. Among Union Army volunteers, one-quarter of men aged 20-24 and over half of men aged 35-39 were rejected as unfit to serve due to illnesses such as cardiovascular disease and hernias. Similarly, elderly men were more likely to suffer from chronic conditions in the past - of men aged 60-64 during the 1890-1910 period, 90% suffered from a chronic condition, as compared to 75% of same-aged men in 1994.

Perhaps most striking, the average age of onset of various common chronic conditions increased by 10 years over an 80-year period, as illustrated in Figure 1, while life expectancy increased by just 6.6 years. In sum, these facts suggest that Americans are not only living longer than in the past, but are also healthier throughout the life cycle, even in old age.

These findings have spawned additional research aimed at understanding the decline in chronic illness over the past century. Some of this work suggests that occupational shifts and the elimination of exposure to infectious diseases at a young age were responsible for much of the decline in conditions such as respiratory diseases and back pain. Other work suggests that chronic illnesses have not only become less prevalent over time, but also less likely to result in functional limitations such as blindness or difficulty walking.

Finally, a series of papers on mortality suggest that increases in birth weight and adult frame size, which are likely the result of better nutrition, have been important in reducing mortality among infants and adults.

The findings of this project have led some of its lead researchers to put forward a theory of "technophysio evolution," which posits that humans have recently gained a degree of control over our environment that has allowed us to achieve rapid improvements in morbidity and mortality. If correct, one implication of this theory is that some common assumptions used by economists - for example, that the rate of health deterioration with age is the same for people in different birth cohorts - are invalid, yielding flawed estimates of future health costs or of the value of health interventions.

While many critical questions about the aging process remain unanswered, longitudnal datasets such as the Union Army sample provide an invaluable tool for researchers in their ongoing search for the answers.

The Early Indicators project was funded by the National Institute on Aging.

Changes in the Process of Aging During the Twentieth Century: Findings and Procedures of the Early Indicators Project