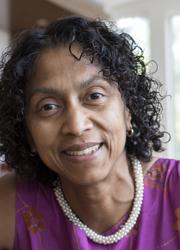 Kosali Simon is the Herman B. Wells Endowed Professor at Indiana University (IU), where she is a Professor in the School of Public and Environmental Affairs and an Adjunct Professor in the economics department and the Kelley School of Business. She is a research associate in the NBER's programs on Health Care, Health Economics, and Children.

Professor Simon's work encompasses many topics in health economics and health policy. Over the most recent several years, she has written extensively on how the Affordable Care Act (ACA) has affected insurance coverage, health care utilization, and health outcomes, as well as on insurer participation and consumer demand in the ACA's health insurance marketplace. Some of her new work also explores the causes, consequences, and potential remedies of opioid misuse.

Simon is a member of the governing board of the Association for Public Policy Analysis and Management and was recent-ly on the board of directors of the American Society of Health Economists and of the Committee for the Status of Women in Economics (CSWEP). She is an associate editor of Health Economics and of the Journal of Health Economics (JHE) and is on the editorial board of several other health and policy journals. Simon recently served a three-year term as the coordinator of CSWEP's national mentoring program for female economists. She will soon commence terms as an editor of JHE and as a National Institutes of Health study section member.

Simon lives in Bloomington Indiana with her husband, who is also on the faculty at IU, and their six children; in her spare time she enjoys cooking in large quantities.