The Emergence of the Female Advantage in Life Expectancy 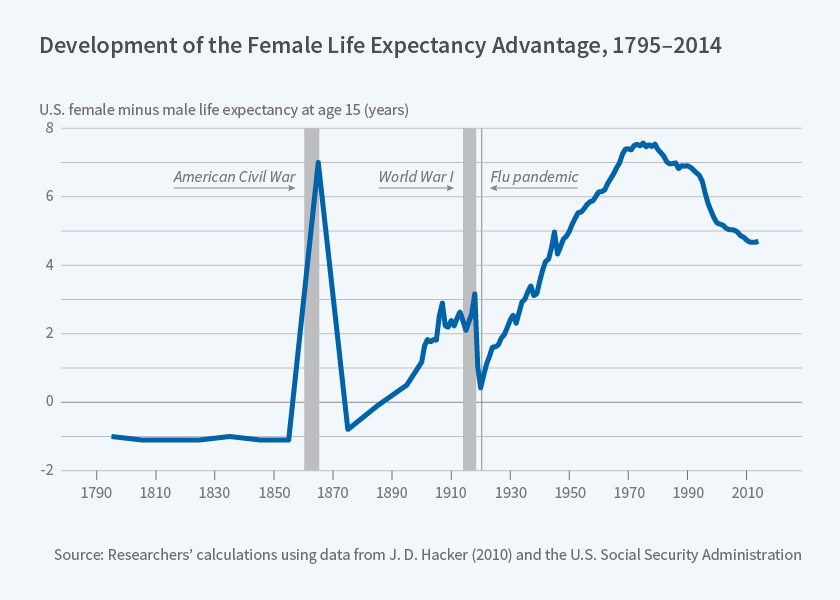 In the U.S. and other developed countries, life expectancy at birth for women is four to six years longer than the equivalent figure for men. Recent evidence suggests that this has not always been the case, however. When and why did the female ad-vantage in life expectancy arise?

The researchers begin by documenting trends in life expectancy in the U.S. Prior to 1890, male life expectancy at age 15 was about one year longer than female life expectancy, except during the Civil War, when war-related mortality led to a temporary female advantage. Starting around 1890, however, a permanent female advantage emerged. The gap grew throughout most of the 20th century (except for a brief decline due to the 1918 flu pandemic), reaching a peak of over 7 years in the 1970s. The gap has since narrowed to less than 5 years. Interestingly, this pattern of a widening and then narrowing gap is also apparent in post-WWII England, France, and Sweden.

Many of the reasons why women live longer than men relate to having two X chromosomes rather than one X and one Y chromosome — for example, women have less visceral fat, which predicts cardiovascular disease. But the fact that the female advantage in life expectancy widened during the twentieth century suggests that environmental factors, particularly those that interact with biological ones, have disproportionately benefitted women. While previous studies have focused on the roles of maternal mortality and smoking prevalence, the initial appearance and widening of the female mortality advantage started well before maternal mortality declined or smoking increased.

Goldin and Lleras-Muney explore whether the reduction in infectious disease may have contributed to the rise in the female advantage. Using new data from Massachusetts containing information on cause of death starting in the late 1800s, the researchers show that females ages 5 to 25 initially had higher rates of infectious disease mortality than did males of the same age. For example, mortality from the 1918 flu pandemic was higher for girls ages 10 to 15 than for boys. When the burden of infectious disease declined, largely due to public health interventions such as clean water and sewerage systems, young women had more to gain.

The researchers caution that with presently available data, it is difficult to rule out the possibility that public and private health innovations were the reasons for later-life mortality improvements. But the case for a key role of declining infectious disease is bolstered by studies showing that early life infectious disease can weaken organs, leave a residual virus in the body, or provoke an inflammatory response that later causes disease.

The researchers conclude "our paper has uncovered (or rediscovered) an important change in the health of females in their childhood and teen years. The precise relationship between that improvement and the female longevity advantage is not yet known. But there is good reason to believe that females, more so than males, were greatly advantaged as children and as adults by the sharp reduction in infectious disease in the early twentieth century."