The Protective Effect of Sunlight against Influenza 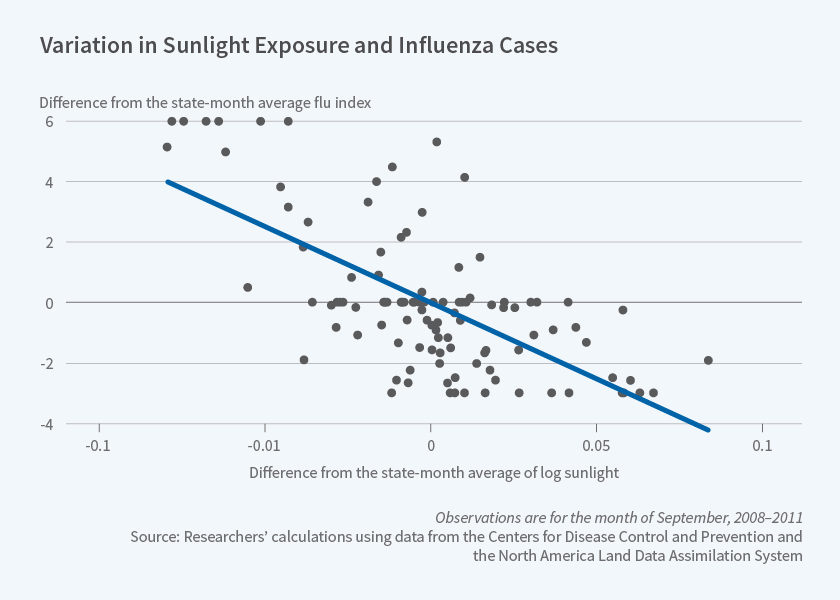 Influenza, a highly contagious viral infection, is a major public health hazard. Influenza and pneumonia (which may occur in severe cases of influenza) are among the top ten causes of death in the U.S. Even less severe cases of influenza can affect worker productivity and require substantial health care resources, while in utero exposure to influenza is associated with an increased risk of serious health problems later in life.

Traditional options for combating influenza include vaccination and avoiding contact with sick persons. Reducing interpersonal contact more generally during flu season also reduces the spread of the disease. Ingesting vitamin D has emerged as another defense, after a recent meta-study found that taking pills helps to protect against infection.

In Sunlight and Protection Against Influenza (NBER Working Paper No. 24340), researchers David Slusky and Richard Zeckhauser analyze an alternative mechanism for securing vitamin D: direct bodily production of vitamin D when exposed to sunlight. Relative to vitamin D absorbed through food sources such as fortified milk or ingested in pill form, passive sunlight exposure is a more effective source of vitamin D and poses no risk of toxicity at high concentrations.

The researchers investigate whether sunlight levels affect influenza incidence. They also examine the importance of herd immunity, in which one person's protection can help reduce risk to others. They hypothesize that herd immunity will be strongest in communities with medium population density, since sparsely populated areas may not be able to sustain the spread of an infectious disease while densely populated areas will require high levels of immunization for efficacy.

The researchers obtain flu data from the Center for Disease Control's flu index, sunlight data from the North American Land Data Assimilation System, and population data from the Census. They assemble data for 36 states for the period 2008 through 2011.

The researchers find that when a state receives more sunlight than is typical for that calendar month in that state, it also tends to experience less influenza than usual. Noting that some months experience minimal influenza activity, the researchers look at the relationship between sunlight and influenza by month. They find that the relationship is strongest in September and apparent to a lesser extent in October as well. They estimate that in September, a ten percent increase in sunlight levels is associated with a three-point decrease in the flu index, where each point represents a one standard deviation increase in the share of outpatient visits that are due to influenza.

A back of the envelope calculation suggests that if levels of sunlight in September were to rise by 10 percentage points in all states, or roughly the observed difference between lower-than-typical and higher-than-typical sunlight months, there would be approximately 30,000 fewer cases of influenza nationwide. Using public estimates of the cost of influenza, this 4.1 percent decrease in the number of annual cases is valued at $3.6 billion.

Interestingly, the study's estimates are substantially higher than those obtained in recent randomized controlled trials of vitamin D supplements. The researchers point to herd immunity as the most likely explanation for the disparity. They note that giving a town extra sunlight would allow most of the community to produce vitamin D, "thereby conveying an externality of protection that triggers herd protection against influenza."

The researchers conclude that their study "reinforces the long-held assertion that vitamin D protects against acute upper respiratory infections." With sunlight serving "as an alternative, natural path through which humans can and do secure vitamin D," something as simple as a walk outdoors on a sunny day can offer protection against influenza.

Sunlight and Protection Against Influenza