How Behavioral Changes Have Affected U.S. Population Health Since 1960 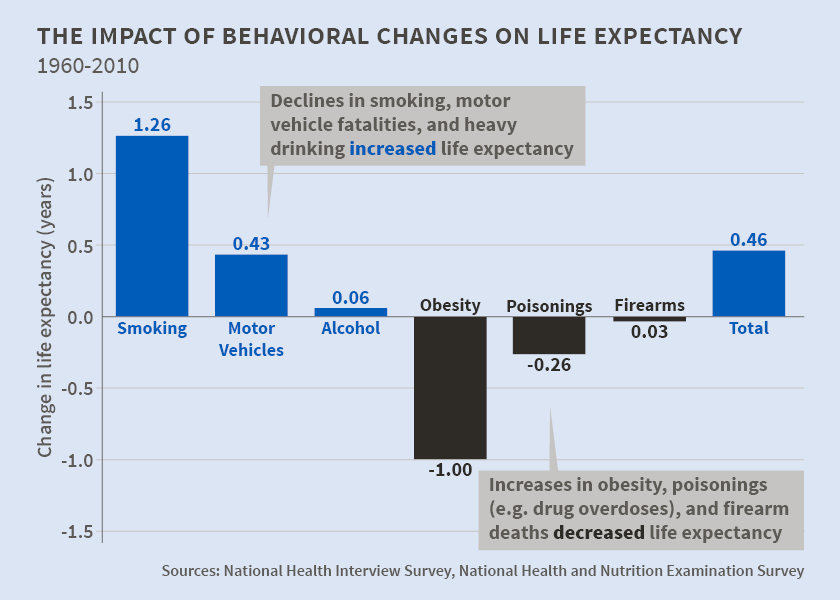 In the continual drive to improve the health of the U.S. population, attention often centers on medical innovation, such as new prescription drugs or surgical techniques. Yet changes in behavioral risk factors also have the potential to improve - or worsen - health outcomes.

According to one recent study, more than 4 in 10 deaths in the U.S. in the year 2000 were accounted for by six behavioral risk factors, including smoking, obesity, and alcohol consumption. These factors also affect the quality of life.

This is the subject of a new working paper by NBER researchers Susan Stewart and David Cutler, "The Contribution of Behavior Change and Public Health to Improved U.S. Population Health" (NBER Working Paper No. 20631). The authors examine the effect of changes from 1960 to 2010 in six major behavioral factors - obesity, smoking, heavy alcohol use, and unsafe use of motor vehicles, firearms, and poisonous substances - on mortality and health-related quality of life.

For their analysis of the first three factors, the authors begin by assembling historical data on body mass index (BMI), smoking behavior, and alcohol use in the U.S. population over time from the National Health Interview Survey and the National Health and Nutrition Examination Survey. They then estimate models relating each of these risk factors to subsequent all-cause mortality and to an overall index of health. Finally, the authors combine the historical data and their model results to estimate the life expectancy change and quality of life change that occurred between 1960 and 2010 as a result of changes in the prevalence of each of the risk factors.

For the other health behaviors, the authors must adopt a different approach due to the lack of historical data on behaviors such as unsafe driving or firearm storage practices. In this case, they simply measure the changes over time in deaths from motor vehicle accidents, firearm use, and poisoning. In order to distinguish the change in mortality due to behavioral change from that due to improving medical care (for example, advances in trauma care that improve survival from a motor vehicle accident, gunshot wound, or accidental poisoning), the authors make the assumption that one-quarter of mortality improvements are due to medical care, following estimates in the literature.

The figure shows the estimated change in life expectancy attributable to changes in each of the six health behaviors between 1960 and 2010. Overall, life expectancy increased by 6.9 years during this period. The large decline in smoking over this period (a decrease in current smokers from over 40 percent of the population to less than 20 percent) is estimated to have added 1.26 years to life expectancy. The prevalence of heavy drinking also fell, from about 11 to 9 percent of the population. Due to the smaller change in this behavior and the weaker link between heavy drinking and mortality, however, this added only 0.06 years to life expectancy.

The decline in motor vehicle fatalities is estimated to have added an additional 0.43 years to life expectancy. However, the significance of changes in driving behavior is greater than this figure might imply. Total motor vehicle fatalities fell by nearly 50 percent during a period when miles driven per capita rose sharply; the authors predict that fatalities would have risen by over 200 percent if deaths per mile driven had remained constant. This points to the success of public health interventions such as airbag requirements, safer roads, and stricter enforcement of seat belt and motorcycle helmet laws.

Incorporating the effects of behavioral changes on quality of life as well as mortality and translating the health gains into a dollar value, the authors find that the gains associated with declines in smoking, motor vehicle fatalities, and heavy drinking are essentially offset by the losses arising from rising obesity and misuse of firearms and poisonous substances. Valued in dollar terms, there is a near zero net gain in health from public health and behavioral changes over the past fifty years. However, the analysis includes a mix of some risk factors that have been aggressively addressed through public health and behavioral changes over a long period (smoking, unsafe driving), and others that are in the earlier stages of being addressed and have proven challenging (obesity, prescription drug addiction).

In sum, improvements in smoking and motor vehicle fatalities have added nearly two years to life expectancy over the past half-century. But much of these gains are offset by health declines due to rising obesity and accidental drug overdose. The authors conclude "our study demonstrates the enormous benefits of public health and behavioral change in improving population health, underscoring the importance of continued advances in these areas of research and practice."

This work was supported by National Institute on Aging research grant P01 AG31098.

The Contribution of Behavior Change and Public Health to Improved U.S. Population Health