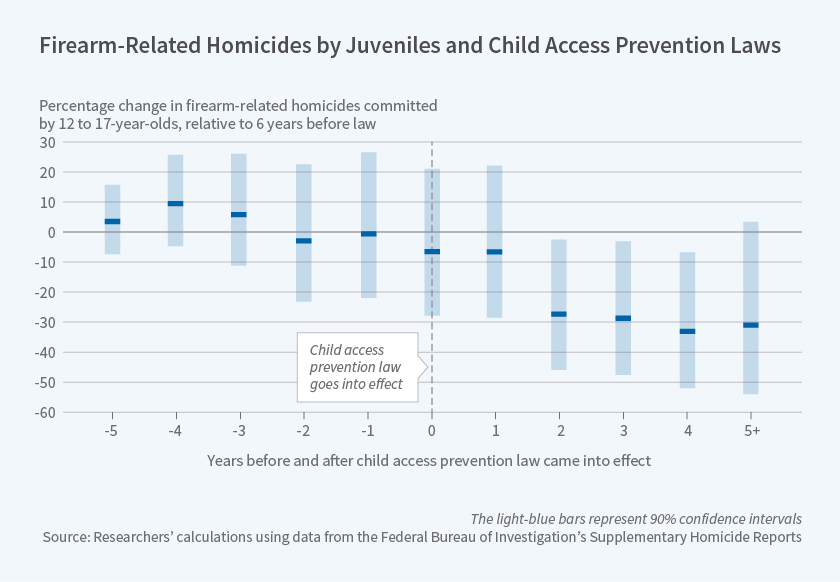 In attempts to curb gun violence by young people, who often use unsecured firearms from their homes, 27 states and the District of Columbia have adopted safe-storage laws designed to restrict juvenile access to guns. These "child access prevention" (CAP) laws vary from state to state in severity of penalties and assignment of liability.

In Child Access Prevention Laws and Juvenile Firearm-related Homicides (NBER Working Paper 25209), D. Mark Anderson, Joseph J. Sabia, and Erdal Tekin analyze FBI crime data from the Supplementary Homicide Reports for the period 1985-2013. They find that, after allowance for differences across states in homicide trends before the laws were enacted, CAP laws are associated with a 19 percent reduction in firearm-related homicides among 12- to 17-year-olds. Without controls for state-specific trends, the drop in juvenile homicides is even larger. The effects are largest in states with a "negligent storage" standard, which is the strictest form of CAP legislation. In negligent-storage states, an individual who allows a minor access to an improperly stored gun can face criminal prosecution. The researchers find larger effects of CAP laws on white than on black youth.