China's State Sector: Transformed, but Not So Privatized 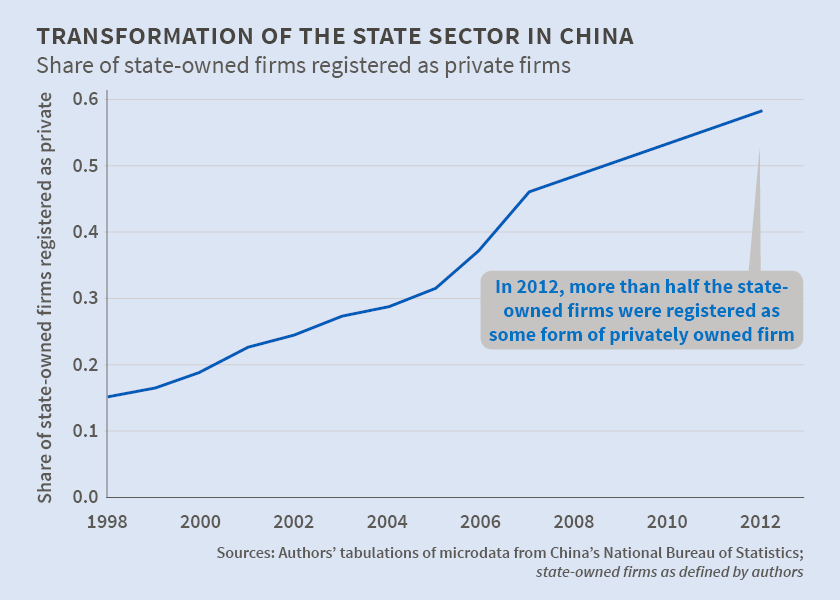 Large public companies have been opened to individual investors, but control remains firmly in the hands of the central government.

The transformation of China's industrial sector that began in the late 1990s was not simply a resource shift from the public to the private sector. It also involved policy changes that transformed the remaining state-owned firms and created new ones, according to Grasp the Large, Let Go of the Small: The Transformation of the State Sector in China (NBER Working Paper No. 21006).

This study injects new evidence into a long-running debate over what drove China's decade-long "industrial revolution," when the share of China's industrial output from state-owned firms fell from 50 percent to 30 percent. This dramatic shift has been hailed by some experts as a triumph of the private sector.

Authors Chang-Tai Hsieh and Zheng (Michael) Song find that the reality is not that simple.

In 1999, the Fourth Plenum of the Communist Party's Central Committee announced industrial reforms under the slogan "Grasp the Large, Let Go of the Small." The plan was to merge large state-owned companies into profit-maximizing but still government-controlled industrial conglomerates while privatizing or closing smaller firms. As it turned out, the state allowed many small state-owned firms to survive, but it closed or privatized many midsize companies, which often had relatively low labor and capital productivity.

This released labor and other resources into the more productive private sector. By analyzing data from China's Annual Survey of Industries on all state-owned and private companies with revenues of more than 5 million RMB ($800,000), the authors calculate that this accounted for 3.2 percent of aggregate growth in the industrial sector during 1998-2007.

The changes at Baoshan, a large steel manufacturer in Shanghai, are illustrative. In 2000, the company was "closed" and all its assets transferred to a corporate entity, Baoshan Company Ltd., which became publicly listed on the Shanghai Stock Exchange. Private investors can own the stock, but Baoshan and five other Chinese steel manufacturers became part of the BaoSteel Group. BaoSteel, which is wholly owned by the Chinese central government, controls 75 percent of Baoshan's shares. Its senior executives are appointed by the Organization Department of the Chinese Communist Party.

Baoshan has flourished under this arrangement. Total sales rose sixfold, from $2.8 billion to $17 billion, between 1998 to 2007. Profits soared more than 20-fold, from $122 million to $2.5 billion. Baoshan is now China's largest steel producer and No. 2 in the world.

Grasp the Large, Let Go of the Small: The Transformation of the State Sector in China