The Association between Job-Finding Expectations and Success 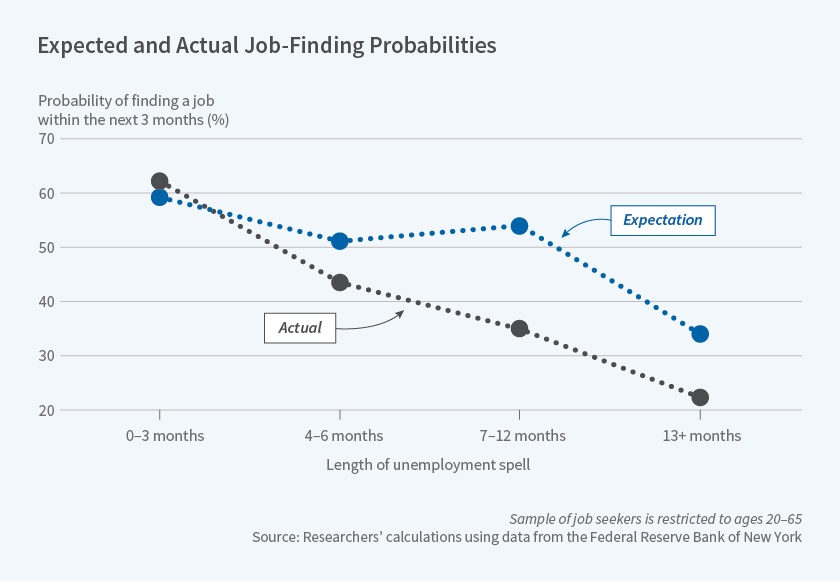 Job-finding rates are lower for those who have been unemployed longer, but the long-term unemployed are still optimistic about their prospects.

About 20 percent of unemployed Americans have been searching for a job for longer than 27 weeks. Known as the "long-term unemployed," these workers have lower job-finding rates than other unemployed workers, which has led to speculation that they may become discouraged about their job prospects over time.

But in Job Seekers' Perceptions and Employment Prospects: Heterogeneity, Duration Dependence, and Bias (NBER Working Paper 25294) Andreas I. Mueller, Johannes Spinnewijn, and Giorgio Topa find that the long-term unemployed are actually too optimistic regarding their job-finding prospects and do not adjust their job-finding expectations downward as they remain jobless longer. The researchers estimate that overly optimistic beliefs about employment prospects explain about 10 percent of the incidence of long-term unemployment.

The analysis focuses on two datasets. The first, the Survey of Consumer Expectations (SCE), is a nationally representative survey that asks respondents if they expect to be employed in the next three, and the next 12, months. The second, the Survey of Unemployed Workers in New Jersey (NJ), asks New Jersey unemployment insurance recipients if they expect to be employed within four weeks. Both surveys question respondents at regular intervals, allowing the researchers to determine how employment expectations change over time.

The researchers also analyze the relationship between perceptions and the well-documented pattern that the longer an individual goes without work, the harder it is to find a job. Both surveys confirm the existence of such "duration dependence," as actual job-finding rates are lower for individuals with longer unemployment spells. Perceptions exhibit a similar pattern: Of respondents in the SCE who have been unemployed for less than three months, 59 percent expect to have a job within three months. However, only 34 percent of those who have been unemployed for 13 months or more expect employment within three months.

The findings do not indicate whether perceptions are lower for the long-term unemployed because individuals who are most optimistic about their employment prospects find jobs and leave the sample or whether longer-unemployed respondents' job-finding beliefs change over time. To answer this, the researchers examine how perceptions change at the individual level. They find that perceived employment probabilities actually increase by an additional 2 percentage points for every additional month of unemployment. While individual beliefs become more optimistic on average as individuals' unemployment spells continue, the group of individuals who remain unemployed longer have lower job-finding expectations on average. Thus it is the composition of who remains unemployed for many months that drives the overall decline in the job-finding perception with unemployment-spell length.

The researchers estimate that if unemployed individuals had accurate, rather than overly optimistic, expectations about their job-finding prospects, they would alter their behavior — engaging in more job search, and accepting less attractive positions, for example — in ways that would reduce the share of unemployment spells lasting more than six months by about 10 percent.