Explosive Growth and Plummeting Prices in the Cloud 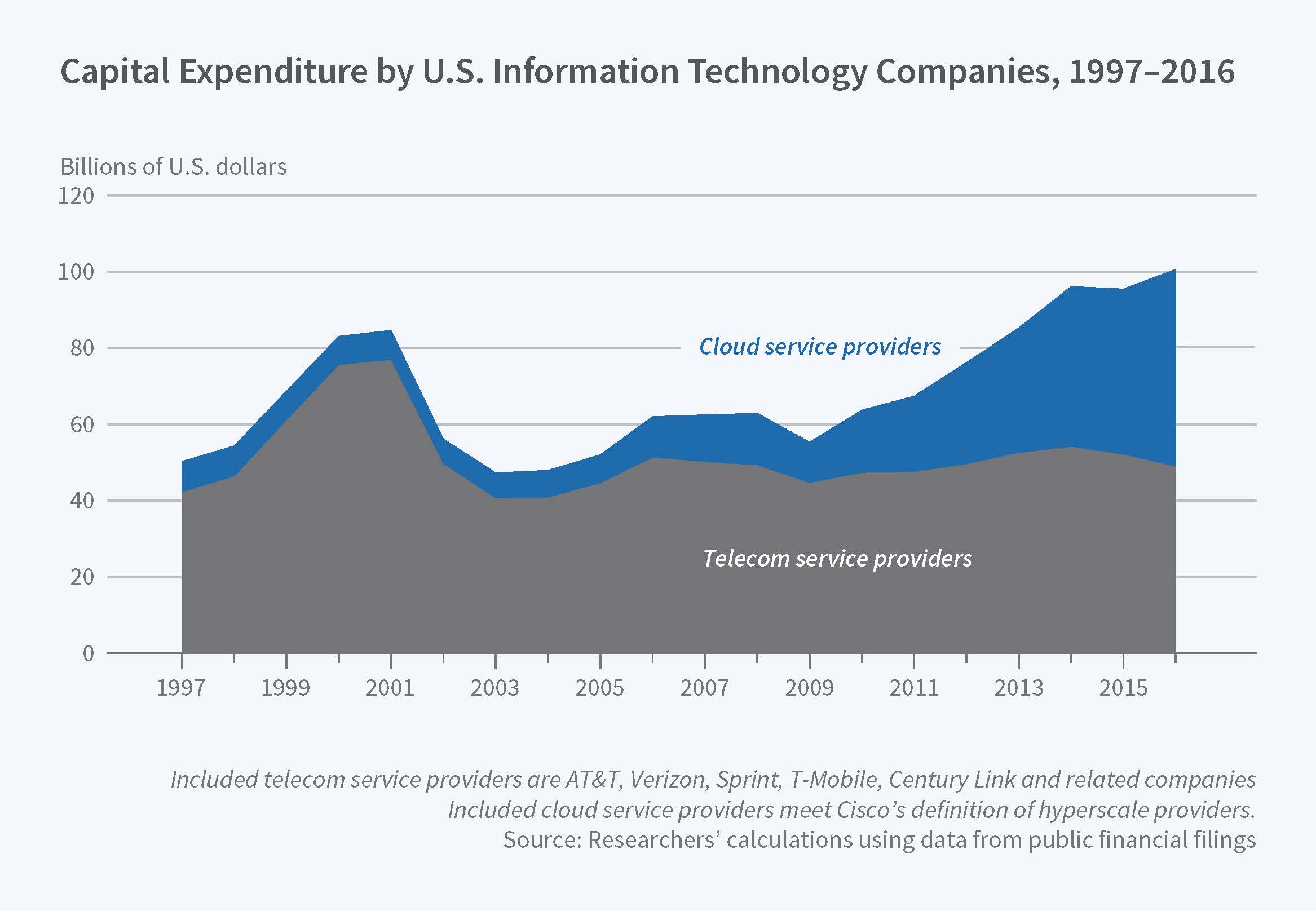 The rise of the virtual cloud — the array of computer services that are offered for off-site use via the internet — has been one of the most important information technology (IT) developments of the last decade. Data on "the cloud" has not, however, been compiled systematically. David Byrne, Carol Corrado, and Daniel E. Sichel remedy this shortcoming, and chart the course of this latest technological revolution in The Rise of Cloud Computing: Minding Your P's, Q's and K's (NBER Working Paper No. 25188).

The researchers find that the prices of cloud services have plummeted, market size has burgeoned, and investment in related technology has soared. But because much cloud spending is on intermediary inputs classified in overly broad categories, its contribution to the economy has been difficult to gauge. Moreover, it appears that official statistics are undercounting a significant chunk of investment in IT equipment that is constructed internally by cloud service providers.

To measure price trends, the researchers rely on the cloud's largest provider, Amazon Web Services, which began posting prices on the internet in 2009. Prices dating back to that period were drawn from web pages stored in the Internet Archive, a nonprofit digital library of books, movies, software, music, and websites.

To assess the growth rate of business purchases of cloud services, the researchers rely on a combination of government and corporate data. Bureau of the Census figures for the economic category covering data processing, hosting, and related services grew 8 percent in 2015 and 10 percent in 2016. But sales of cloud services rose much more rapidly: Revenue at Amazon Web Services grew 70 percent in 2015 and 55 percent in 2016. Estimates of traffic at cloud data centers, compiled by Cisco Systems, indicate even faster rates of advance, at an average annual rate of increase of 62 percent from 2010 to 2016. Translating these various growth estimates into the value of purchased cloud services, however, is tricky, because of inconsistent definitions and the wide range of activities supported by cloud infrastructure.

The researchers also conclude that official economic records likely miss a significant amount of investment in IT by cloud service providers. These companies purchase a large quantity of electronic components that appear to be used internally and incorporated into final products. The researchers estimate that had such "own-account investment" been counted as business investment, the official figures for nominal IT equipment and software investment would have been $58 billion higher for 2015. That amounts to 0.32 percent of GDP. Over the 2007-15 period, they calculate that including own-account investment would boost the average annual nominal growth rate for IT equipment investment by roughly 2 percentage points.

The Rise of Cloud Computing: Minding Your P’s, Q’s and K’s