Movies, Margins, and Marketing: Encouraging Use of Iron-Fortified Salt 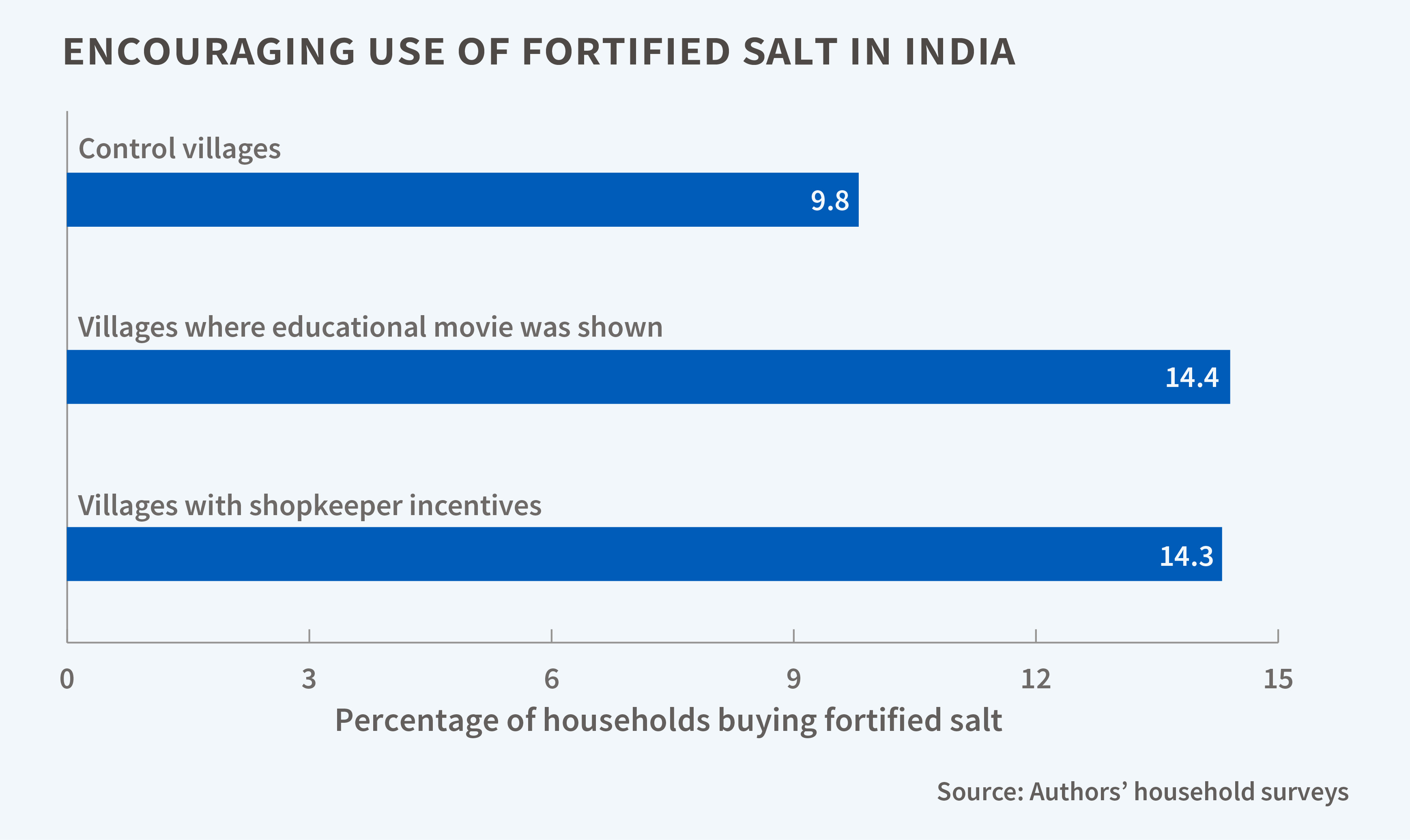 An entertaining, educational movie and an incentive for shopkeepers to push the product led to large gains in the number of Indian household users.

Anemia is estimated to affect 1.6 billion people worldwide. Iron deficiency is one of its leading causes, along with other nutritional deficiencies, illnesses and diseases such as diarrhea and malaria, and parasitic infections. Iron deficiency anemia (IDA) is associated with a slowing of physical and cognitive development, with potentially long-lasting effects. IDA may lower productivity among affected working-age adults, as feeling weak is the most common symptom of the disorder. Severe anemia during pregnancy can lead to low birth weight and child mortality. High rates of anemia are observed broadly among older adults, and low hemoglobin levels in the elderly are associated with cognitive decline and reduced physical performance.

In the mid-2000s, India's National Institute of Nutrition developed salt fortified with iron and iodine – known as doubly-fortified salt, or DFS – in an effort to reduce anemia rates by increasing the public's iron intake. The efficacy of this approach was demonstrated among small-scale tribal populations and school children, but there has been little exploration of whether the general public would be willing to buy and use the salt, what households' responses to various pricing and marketing schemes would be, and whether it would be effective enough, at stable, safe levels of fortification, to make a significant difference.

DFS is a new product, with some characteristics that would positively influence adoption (it is clean and white, sold in a fancy packet with a trusted brand name) and some drawbacks (people are generally reluctant to try new foods, and there were some instances of food blackening early on). Moreover, the authors found that many people did not understand the links between the product and anemia, or between anemia and wellbeing. The basic marketing campaign conducted by the manufacturer at launch was ineffective; two years after the introduction of the salt, absent any additional information campaign, the researchers found that no one who bought DFS knew that it helped reduce anemia, or reported buying it because it was good for the health of household members.

Even when the fortified salt was provided free, only about half of households actually used it for cooking. When they had to buy it at just below half price, with no other intervention, about 20 percent of households gave it a try, but only 10 percent still were using it after about three years.

Against this backdrop, the authors conduct a randomized control trial that shows the power of a strong communication campaign. In 64 villages, randomly selected out of 200 villages where DFS salt was made available in shops, an entertaining movie promoting the salt's use was seen by about 20 percent of the households. For households that had to buy the salt, consumption of DFS increased from 9.8 percent in villages where the movie was not shown to 14.4 percent in villages where it was shown, an increase of 50 percent over the mean. For comparison, when the DFS was distributed free, 54 percent of households consumed it. Eight percent of households who bought DFS in the villages where the movie was shown reported that they bought this salt because it helped in fighting anemia, as against none in other villages, and they paid a lower price on average, as advertised in the movie.

The authors also find that shopkeepers are powerful influencers of what households do. A small increase in retailer profit margins resulted in an increase in take-up at least as large as that caused by the movie screening. There is some ambiguity on how this was achieved, the researchers report. The retailers claim that they dropped the final price of the salt, albeit very little. Village households do not report such a decline and instead claim that they bought the salt because it was the only one available.

Movies, Margins and Marketing: Encouraging the Adoption of Iron-Fortified Salt