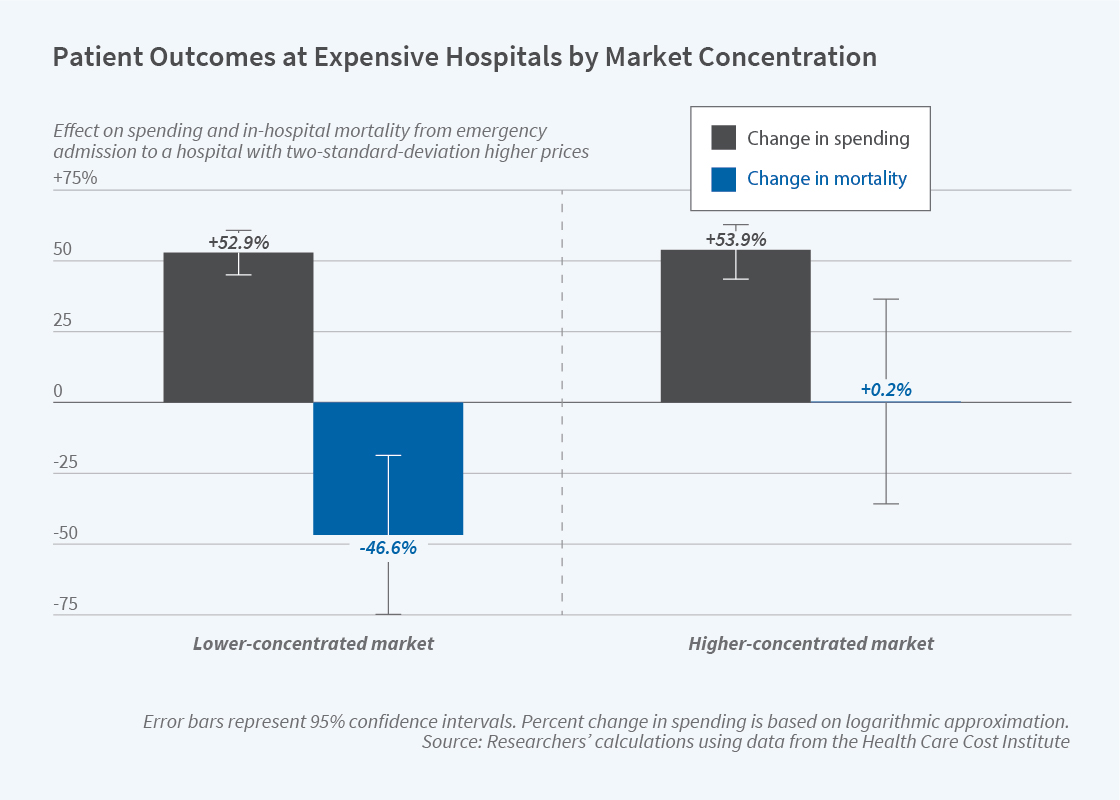 Over the last two decades, the US hospital sector has experienced significant consolidation, with over 1,600 mergers among the nation’s 6,000 hospitals. Nearly 70 percent of hospitals are now located in a highly concentrated market. During this period, according to the Bureau of Labor Statistics, prices for hospital services have grown more quickly than prices in virtually all other sectors. Legislators in various statehouses and the US Congress have put forward proposals to regulate hospitals’ prices.

In Do Higher-Priced Hospitals Deliver Higher-Quality Care? (NBER Working Paper 29809), Zack Cooper, Joseph J. Doyle Jr., John A. Graves and Jonathan Gruber test whether patients who get treated at higher-priced hospitals receive better care, and whether there is a different price/quality relationship in concentrated versus unconcentrated hospital markets. They argue that before proceeding with price regulation, it is vital to understand whether high hospital prices reflect patients’ lack of options for care due, for example, to a lack of competition, or their willingness to pay for quality.

In competitive markets, patients are more likely to survive at higher-priced hospitals, but this pattern is not observed in concentrated markets.

The core empirical challenge the authors had to overcome was selection bias: sicker patients may be more likely to receive care from high-priced hospitals. To address this issue, the researchers looked at outcomes of patients who were transported by ambulance in an emergency, and who received nondeferrable care — care that occurs at the same frequency on weekends as it does during the week. The researchers exploit three aspects of the US ambulance system to get plausibly random assignment of patients to hospitals: 1) most regions of the US are served by multiple ambulance companies, 2) ambulance companies are randomly assigned to pick up patients, and 3) ambulance companies have strong preferences for where they transport patients. Given these circumstances, the researchers are effectively comparing outcomes for patients from the same ZIP code who are transported to high- versus low-priced hospitals because of the ambulance company that was randomly assigned to transport them to the hospital.

In markets with more hospital competition, going to higher-priced hospitals raises spending by approximately 53 percent and lowers mortality by 47 percent. By contrast, in concentrated hospital markets, receiving care from a high-priced hospital also raises spending by 54 percent, but has no impact on patient outcomes. Notably, the higher spending that occurs at high-priced hospitals in less concentrated markets is potentially cost effective. Such hospitals spend approximately $1 million per life saved. Assuming that the individuals in the research sample live for another nine years, this is cost effective relative to the Environmental Protection Agency’s $8.7 million benchmark estimate of the value of a statistical life.

The study draws on data from the Health Care Cost Institute, which captures claims from nearly 30 percent of individuals in the United States covered by employer-sponsored insurance plans. The sample consists of more than 200,000 admissions to more than 1,800 hospitals between 2007 and 2014.

The researchers construct a price index for each hospital based on negotiated prices paid by insurers and adjusted for each facility’s mix of patients and services. They define a market as concentrated if its Herfindahl-Hirschman Index (HHI) exceeds 4,000, a figure used as a trigger point for price regulation in several policy proposals. HHI is calculated for each hospital using the number of hospital beds accessible within 30 minutes of travel from it. The index ranges from 0 to 10,000, with 10,000 representing a hospital with a monopoly position.

The researchers point out that price caps in competitive markets could have the unintended consequence of discouraging hospitals from making investments to improve care. With regard to concentrated markets, however, they observe that “high prices likely reflect patients’ lack of alternative options, not hospital quality.” They note that the challenge in designing price caps for any market is setting the caps high enough to avoid an adverse effect on quality.