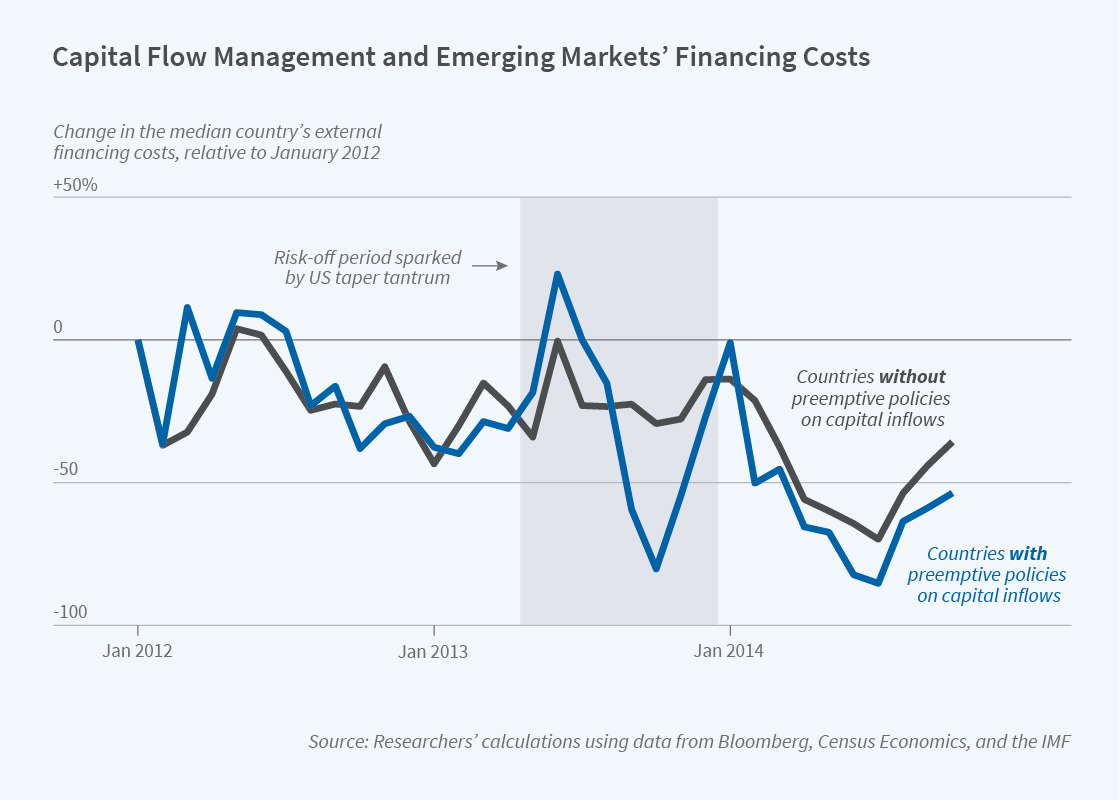 In Preemptive Policies and Risk-Off Shocks in Emerging Markets (NBER Working Paper 29615), Mitali Das, Gita Gopinath, and Şebnem Kalemli-Özcan analyze whether policies designed to limit the risk taken on by individual borrowers can reduce the risk premium that a nation is required to pay in global capital markets. Using a new dataset on active, countercyclical policy measures used to adjust capital flows and borrowing from 1996 to 2020, the researchers examine external borrowing costs in 56 emerging or developing countries with floating or managed floating currencies. They conclude that countries with preemptive active-management policies exhibited a 30 percent lower interest rate premium on external borrowing during an adverse economic shock. They also had lower foreign exchange debt and lower exchange rate volatility.

The researchers measure external finance premia for each country after the “Taper Tantrum” associated with Federal Reserve Chairman Ben Bernanke’s speech in 2013, and after the COVID-19 shock in 2020. They define preemptive policies as any officially reported net capital flow management that occurred in the five years before a risk-off shock, or the imposition of any one of 11 domestic macroprudential policies during the same time period. The researchers determine that preemptive policy measures were in place if there was a tightening action in at least one instrument and if the total number of tightening actions across all policies during the period exceeded the total number of easing actions.

The risk premia for the treatment group — countries that used preemptive measures prior to a shock — were compared to risk premia for countries that did not. More than 80 percent of the countries in the sample implemented macroprudential policies at some time during the sample period, and more than 70 percent eased them in response to the COVID-19 shock. More than one-third managed both capital inflows and outflows.

The researchers observe that the lower risk premium preserves a country’s capital market access when it is most needed. Policies that limit the buildup of debt and currency mismatches reduce the need to defend the exchange rate, allowing central banks to focus on domestic policy objectives.