Opioid abuse is a pressing public health concern in the US. Deaths from opioids rose five-fold between 1999 and 2015, and the number of deaths from opioids each year is now twice that from homicides. The intensity of the crisis varies substantially across geographic areas, with hard-hit states such as West Virginia and Ohio experiencing eight to ten times as many opioid-related deaths per capita as California and Texas.

While the magnitude of the crisis is fairly well understood, its causes are less well established. A pair of influential recent studies suggest that worsening economic prospects are leading to "deaths of despair" from opioids, alcohol, and suicide, particularly among less-educated whites. Mental health issues and prior substance abuse are also known to be correlated with opioid abuse. These might be considered "person-specific" factors that affect the demand for opioids. Other analysts point to the role of local physician prescribing behavior — including the existence of "pill mills" — in the crisis, as well as the potential for state-level prescription monitoring programs to curb abuse. These are "place-specific" factors that affect the supply of opioids. 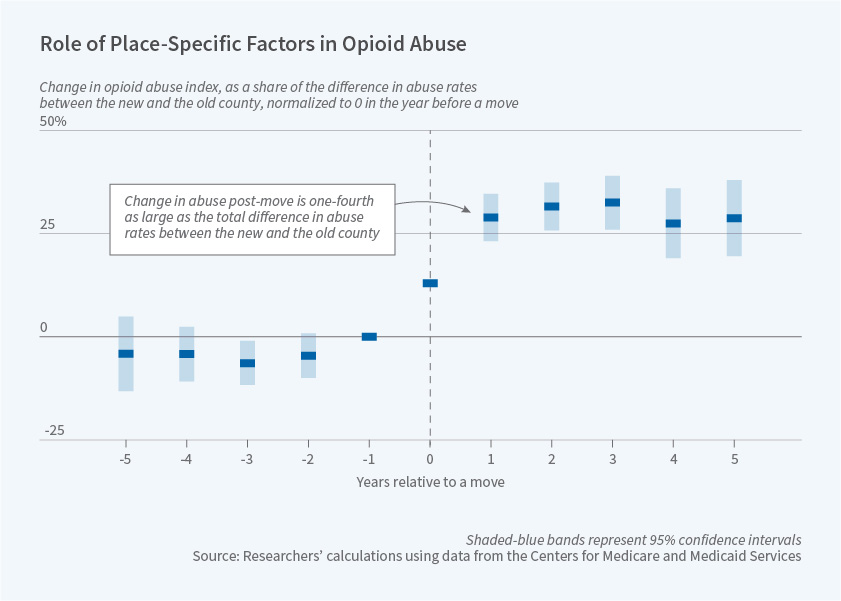 The authors focus on Social Security Disability Insurance (SSDI) recipients in their analysis. Opioid use is common in this population — over half of SSDI recipients receive an opioid prescription each year, and SSDI recipients are responsible for 13 percent of all opioid prescriptions in the US, although they represent just 5 percent of the adult population. SSDI beneficiaries are eligible for Medicare (usually after two years of SSDI receipt), and have the option of enrolling in a prescription drug plan through Medicare Part D.

The data used in the analysis are Medicare claims data for over 2 million SSDI beneficiaries with Part D plans. The authors create an "abuse index" that is the individual's predicted probability of a hospital ER visit or inpatient admission for an overdose (over a one-year period) given their observed level of risky opioid behaviors, such as filling prescriptions with a high morphine-equivalent dose, from four or more providers, or before the existing prescription has expired. The average probability of abuse as measured by these proxies is 1.1 percent.

The authors find that opioid abuse jumps shortly after a move and remains at the new higher level for up to five years after the move (the longest period examined in the study). The increase in the probability of opioid abuse is about one-fourth as large as the total difference in abuse rates between the old and new counties, suggesting that place-specific factors may explain about one-fourth of abuse. Interestingly, the effects are particularly pronounced for prior opioid users, who experience an increase in abuse that is four times larger than that for movers who have not filled an opioid prescription within the past year.

As the authors note, "understanding the causes of opioid abuse is an important first step toward designing effective policies to combat the current opioid crisis." Their findings suggest a key role for place-specific factors, such as physician prescribing behavior, in driving the epidemic. These results "suggest that supply-side policies that restrict opioid availability could potentially reduce opioid abuse."

The results also raise several important questions. First, to the extent that supply-side constraints on prescription opioids lead SSDI recipients to reduce their use of these drugs, do recipients switch to illegal sources such as heroin? Second, how much of the estimated effect of place is due to supply side conditions related to the health care system and why do these conditions vary across counties? And third, what specific demand-side factors explain the substantial share of opioid use that is person-specific? These questions provide critical directions for future research.

The research reported herein was performed pursuant to grant #RDR18000003 from the US Social Security Administration (SSA) funded as part of the Retirement and Disability Research Consortium. The opinions and conclusions expressed are solely those of the authors and do not represent the opinions or policy of NBER, SSA or any agency of the Federal Government. Neither the United States Government nor any agency thereof, nor any of their employees, makes any warranty, express or implied, or assumes any legal liability or responsibility for the accuracy, completeness, or usefulness of the contents of this report. Reference herein to any specific commercial product, process or service by trade name, trademark, manufacturer, or otherwise does not necessarily constitute or imply endorsement, recommendation or favoring by the United States Government or any agency thereof. In addition to support from the SSA this research was supported by a grant from the National Institute on Aging, the National Science Foundation, and the Stanford Institute for Economic Policy Research.