Skip to main content
The Bulletin on Retirement & Disability: No. 2, June 2021

While employer-sponsored defined contribution plans operate within a common framework, many plan features are determined by the employer. Employers may choose to match employee contributions up to some threshold and may require minimum tenure lengths before employer contributions are vested. They may choose to automatically enroll and escalate their employees’ contributions. Employer choices with respect to all of these features can significantly impact workers’ accumulation of retirement account balances. 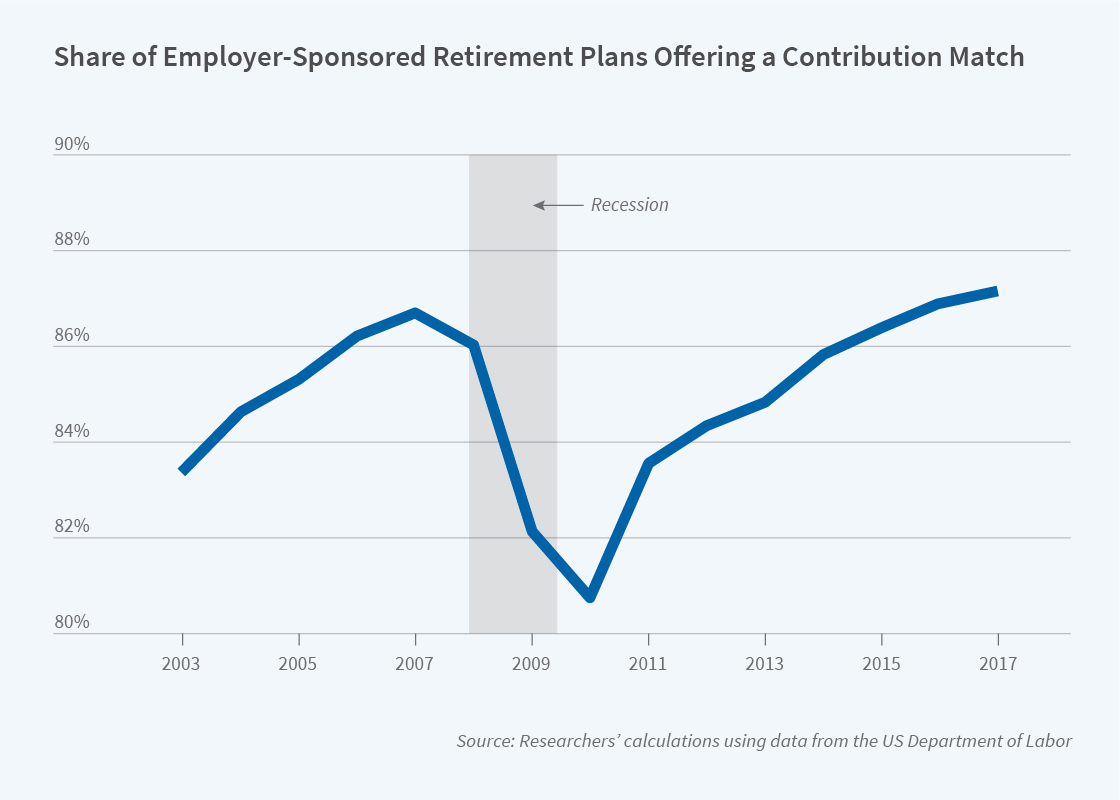 The authors construct a data base by hand-coding the narrative plan descriptions that are provided as an attachment to the annual Form 5500 for firms with more than 100 participants. They are able to identify key features such as matching, vesting, and auto-enrollment from these descriptions. Their sample of 5,000 plans covers up to 37 million participants annually, or more than half the population of workers enrolled in private and nonprofit sector defined contribution plans.

A first finding is that matching schedules, when offered, have become more generous over time. The combined employer and employee contribution rate of an individual fully exploiting the employer match has increased, on average, by roughly 1 percent of salary between 2003 and 2017.

The authors examine match suspensions during the Great Recession. Among plans offering a match in the previous year, nearly 10 percent of plans suspended their match in 2009, at the height of the recession. While 70 percent of these plans reintroduced matching within two years, often with the same matching formula, about one in ten plans that suspended their match had not reintroduced it by 2017. Plans that did not suspend their match during the Great Recession did not tend to change the matching formula.

A third finding is that government regulations play an important role in plan design. Policymakers incentivize the adoption of specific matching formulas, vesting schedules, or auto-features by granting “safe-harbor” status to firms with certain characteristics, exempting them from non-discrimination testing. By 2017, over 40 percent of plans satisfy one of the safe-harbor plan conditions, with around half of these satisfying them at the minimum requirements.

Finally, the authors report that vesting schedules have not changed much over time, and that about 85 percent of plans have a shorter vesting period than the maximum allowed by law.

The authors conclude by noting their findings may have relevance for the COVID-19 pandemic, which has brought on a new wave of match suspensions. They suggest that future research extending their data collection would be useful to examine the incidence and composition of match suspensions caused by the pandemic-related economic disruption.