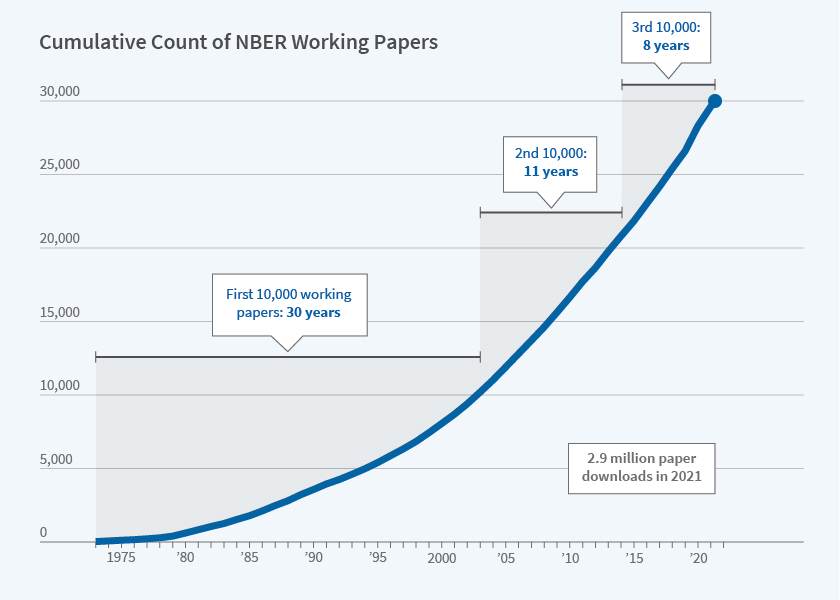 The NBER working paper series reached a milestone this week with the distribution of the 30,000th paper. The series was launched in 1973 by labor economist Robert Michael to disseminate research prior to journal publication and to facilitate distribution of data appendices and related material. Working paper #1 was Education, Information, and Efficiency by Finis Welch.

The series began on a modest scale, a reflection of the then-small number of NBER affiliates, but quickly expanded to encompass a broad range of NBER research. There were 41 working papers in the first year, and it took 12 years to reach paper number 1000. Originally, working papers were printed and had bright yellow covers. Packets of papers were mailed occasionally to libraries, leading economics departments, and research institutes. As the number of NBER researchers expanded, the volume of working papers rose. Eventually, a shift to digital distribution became essential for accommodating the expanding number of studies.

In 2020, when many economists ratcheted up their research output to address the many new questions posed by the COVID-19 pandemic, a record 1,713 working papers were distributed. The annual average for the last five years was 1,322. More than 25,000 subscribers receive the “New This Week” email each Monday, and there were nearly three million working paper downloads in 2021. Twitter has become an increasingly important channel for calling attention to working paper content.

The evolution of the NBER working paper series provides some insights on the changing structure of economic research. For example, 60 percent of the working papers distributed during the series’ first decade had a single author, 35 percent were coauthored, and 5 percent had more than two authors. In the last decade, only 11 percent had a single author, while 56 percent had three or more. The number of working papers per NBER affiliate per year, which averaged more than 1.75 in 1980, has trended down. It was approximately 0.96 in 2000, and averaged 0.78 in the most recent five years excluding 2020.