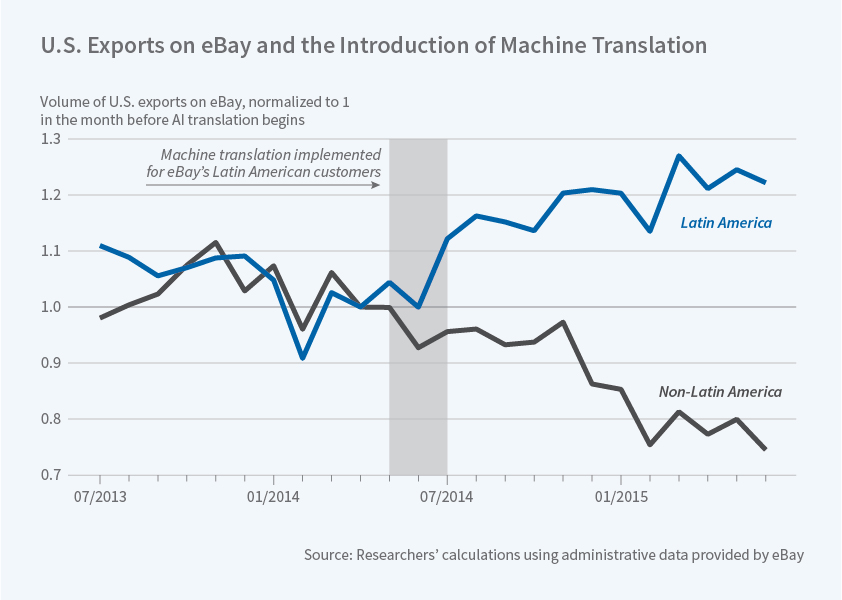 Advances in machine learning have significantly improved the performance of various artificial intelligence (AI) systems. Error rates of top speech recognition systems, for example, decreased from 15 percent in 2011 to 5 percent in 2017. Despite such advances, economists have found only scant evidence that this technology has affected aggregate productivity. Some argue that complementary innovations will be required to integrate AI into production.

In Does Machine Translation Affect International Trade? Evidence from a Large Digital Platform (NBER Working Paper No. 24917), Erik Brynjolfsson, Xiang Hui, and Meng Liu explore the economic effects of one technology that has been easily integrated into business operations: eBay's Machine Translation (eMT) program. eMT, which has been rolled out for several language pairs such as Spanish-English in recent years, quickly translates search queries and results between languages. In the case of a Spanish-speaking buyer, for example, eMT translates the buyer's search terms into English, allowing for a search of relevant English-language listings, then translates the search results into Spanish for the buyer's review.

The researchers find that the introduction of eMT, which produced significantly better translation results than the previous translation program, increased international trade on the eBay platform significantly. After implementation, U.S. exports via eBay to Spanish-speaking Latin American countries increased by more than 17 percent.

The researchers find stronger effects for products that likely had higher translation-related costs before the introduction of the new technology. For example, the export increase was larger for differentiated products such as clothing, antiques, jewelry, and art than for homogeneous products such as cell phones or books, which have ISBN codes or other standardized identifiers. Export increases were also larger for products with longer item titles, and for less expensive products, for which translation-related costs constitute a higher fraction of item value. Exports of products worth less than $50 increased by 19.3 percent, while exports of more expensive items increased by a smaller amount. These effects suggest that the increase in exports is driven by improved translation, not unobserved contemporaneous events such as advertising.

The effects of the introduction of eMT also appear to be larger for eBay buyers who likely faced higher translation-related costs. Using eBay users' experience levels as a proxy for translation-related costs, the researchers find that inexperienced buyers — defined as those who have purchased less than $2,500 of products on the platform in the prior year — saw a 6.1 percent larger increase in purchases than experienced buyers.

This study suggests that language barriers affect trade, and that reducing those barriers can meaningfully increase it. The researchers calculate that "introduction of eMT is equivalent of the export increase from reducing distances between countries by 37.3 percent."

According to the researchers, this example shows how AI already is affecting productivity and economic activity in some fields. They note that in addition to translation, AI applications are also emerging in speech recognition, computer vision, and recommender systems, with applications ranging from medical diagnoses to customer support, and from hiring decisions to self-driving vehicles. They predict additional economic effects from AI will soon be documented.