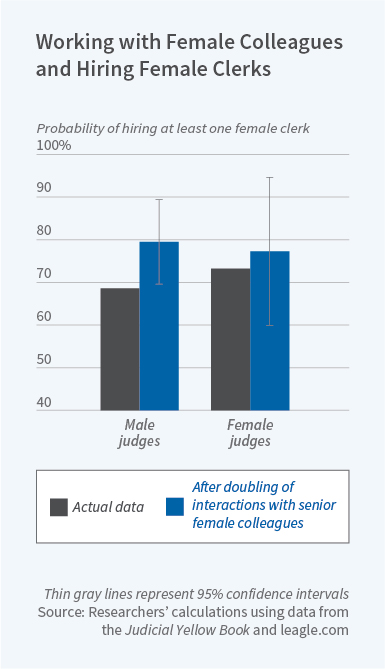 US appellate court judges are randomly assigned to hear cases, typically alongside two colleagues who also are randomly assigned. As a result, the number of female colleagues with whom a given judge will hear cases is essentially random. The researchers use this source of variation to analyze how increased exposure to female colleagues affects judges’ future decisions in the hiring of law clerks. Clerks’ jobs are prestigious positions typically filled by graduates of top law schools. Judges enjoy almost complete control over the hiring of their law clerks.

The researchers note that most of the judges in the sample are older and began their careers when women were less prevalent in the legal profession. “Federal judges make hiring decisions in a labor market where women are significantly more numerous and successful than they were when the judges first entered the legal profession and the judiciary,” they write.

The researchers note that their findings have important implications for the labor market and for companies seeking to diversify their ranks. “[I]ncreases in the diversity of the upper rungs of a profession can shift attitudes in a way that creates opportunities at the entry level of the profession,” they conclude. “[I]ncreasing the diversity in the leadership of a profession… may have benefits beyond their immediate beneficiaries.”

Professional Interactions and Hiring Decisions: Evidence from the Federal Judiciary