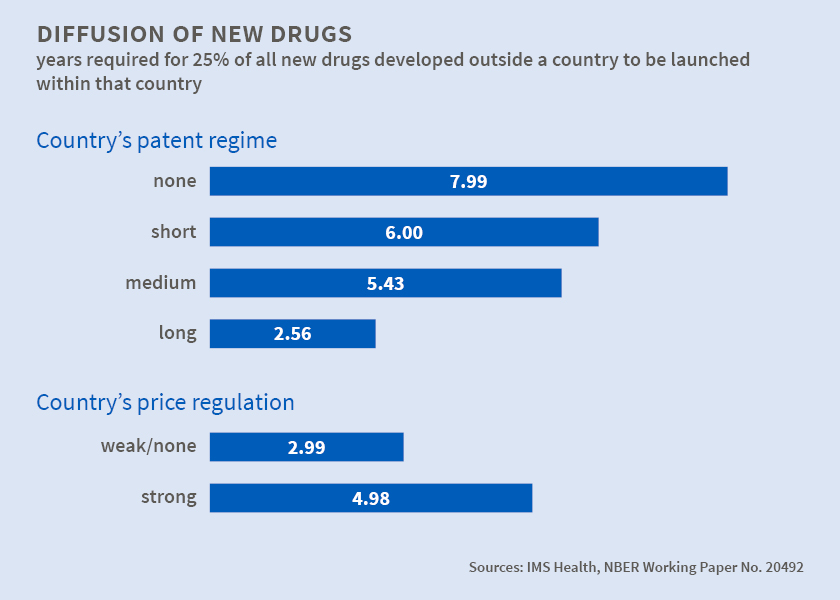 Two recent studies focus on government policies that affect the development and pricing of new drugs, and the effect of such policies on marketing practices both in the United States and abroad.

In Starving (or Fattening) the Golden Goose?: Generic Entry and the Incentives for Early -Stage Pharmaceutical Innovation (NBER Working Paper No. 20532), Lee Branstetter, Chirantan Chatterjee, and Matthew J. Higgins analyze the impact that the increasing popularity of generic drugs over the past decade has had on the rate and nature of early-stage pharmaceutical innovation. Their research indicates that while the overall level of innovation has increased, a 10 percent increase in generic penetration in a given market is associated with a 7.9 percent decline in the number of early-stage innovations, and a 4.6 percent decline in the number of "first-in-class" pharmaceutical innovations in that market.

The researchers construct a unique dataset to analyze the early stages of drug development within narrowly defined therapeutic areas. They also use data on branded and generic drug sales across all therapeutic categories in the U.S. market, obtained at the firm-product-year level. They find that the effects of generic entry appear to vary with the extent of cross-molecular substitution, or the rate at which drugs within a particular therapeutic class can be substituted. For example, in markets with limited substitution, such as neurological and psychiatric disorders, doctors may be reluctant to move away from a good "match" between a patient and a drug. In these markets, the researchers find no statistically significant effect of generics on early-stage innovations. In contrast, in markets with higher levels of cross-molecular substitution, such as anti-infectives, they find substantial negative effects of generic entry on innovation.

The authors also document a change in the nature of innovation. In markets with significant generic entry, they find companies responding by shifting from chemical-based products towards biologic-based products (that is, products based on extremely large, complex molecules such as proteins). They argue this move is a rational response given the lack of an entry pathway for generic equivalents to biologics-based drugs over their sample period.

The researchers suggest that in order to determine whether the shift in pharmaceutical R&D associated with generic entry raises consumer welfare, it is necessary to create a "map" that locates the various therapeutic categories in technology space. By defining the proximity of various therapies to each other, such data could facilitate the comparison of research success probabilities in domains where drug development effort is declining and ones in which it is increasing. The authors add that the welfare questions have worldwide implications, since the rise of generics in the U.S. market is reshaping global drug development.

Looking at drug development from a different angle, in Patents and the Global Diffusion of New Drugs (NBER Working Paper No. 20492), Iain M. Cockburn, Jean O. Lanjouw, and Mark Schankerman note that governments use patents to encourage development of new drugs and price regulation to ensure affordability. The tension between these objectives is perhaps most starkly seen outside the U.S., where large numbers of patients may be unable to afford patent-protected medications. At the very least, there may be a considerable lag between, say, the FDA's approval of a new drug for the American market and its introduction abroad. New drugs often become available in global markets a decade or more after they are launched commercially in the U.S., Europe, or Japan. Indeed, many new drugs ultimately reach only a few wealthy countries.

The authors use data on the launches of 642 new compounds in 76 countries during 1983-2002 to demonstrate that, all else being equal, longer and more extensive patent protection accelerated diffusion of new drugs abroad, while price regulation strongly delayed it. Health care policies, institutions, and economic and demographic factors that make markets more profitable also speed diffusion.

The authors' findings raise the broader point, not limited to pharmaceuticals, that patent rights can strongly impact the diffusion of innovations as well as the rate at which innovations are made. The policies that promote faster launch - more rigorous patent rights and the absence of price regulation - are also those that raise prices.

Generic Competition and the Incentives for Early-Stage Pharmaceutical Innovation