Differences in the Borrowing Behavior of Public and Private Firms 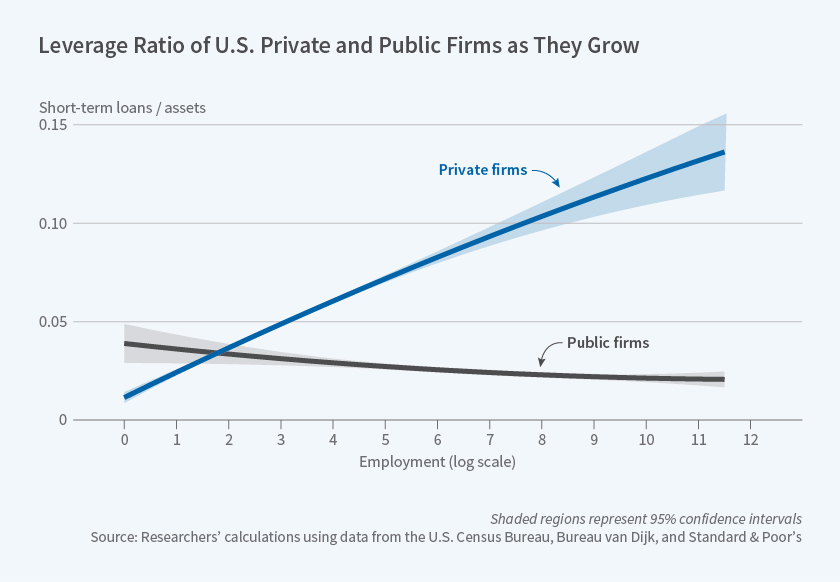 Privately held firms account for more than half of U.S. gross output and nearly two-thirds of employment, but they have been studied much less than publicly traded firms. In Leverage over the Life Cycle and Implications for Firm Growth and Shock Responsiveness (NBER Working Paper  25226), Emin Dinlersoz, Sebnem Kalemli-Ozcan, Henry Hyatt, and Veronika Penciakova focus on the leverage behavior of private firms. They find that there are important differences in whether, when, and how public and private firms borrow. These differences are potentially important for understanding how the corporate sector behaves during economic downturns.

The researchers construct a novel database from the balance sheets of publicly listed and privately held firms, which they match to the Longitudinal Business Database of the U.S. Census Bureau. They exclude firms in the finance, insurance, real estate, rental, and leasing sectors. Their database includes more than 180,000 firms, 97 percent of them privately held. The publicly listed firms are much larger than their unlisted counterparts. On average, the publicly traded firms are 34 times larger on an employment basis and boast 64 times higher revenue. The database includes small as well as large firms. The researchers condition most of their analysis on the age of the firm and other observables at the firm level.

Public and private firms follow different patterns with respect to firm growth and leverage, which makes them differentially sensitive to financial shocks. Private firms appear to have more trouble than public firms accessing long-term financing. As they grow, they increase their leverage, relying especially on short-term debt. For privately held firms, a one standard deviation increase in size is associated with a 24 percent rise in overall leverage, a 37 percent rise in short-term leverage, and a 19 percent rise in long-term leverage. Size appears to be a better predictor than firm age for whether a private firm likely faces financial constraints.

For public firms, there is a U-shaped relationship between firm size and leverage. While leverage declines and equity rises with firm size for smaller public firms, very large public firms often have substantial leverage in the form of long-term debt.

These financing behaviors are potentially important during economic downturns, when lending slows and businesses may struggle to stay solvent. The researchers study borrowing patterns during the Great Recession to better understand how a credit squeeze affects different types of firms.

They find that higher leverage is associated with higher growth for private firms, which suggests that access to credit fosters firm expansion. This pattern was weaker during the recent financial crisis than at other times, a potential indication of binding financial constraints. Firm growth is higher for those public companies with less short-term debt; this relationship did not appear to change during the financial crisis.