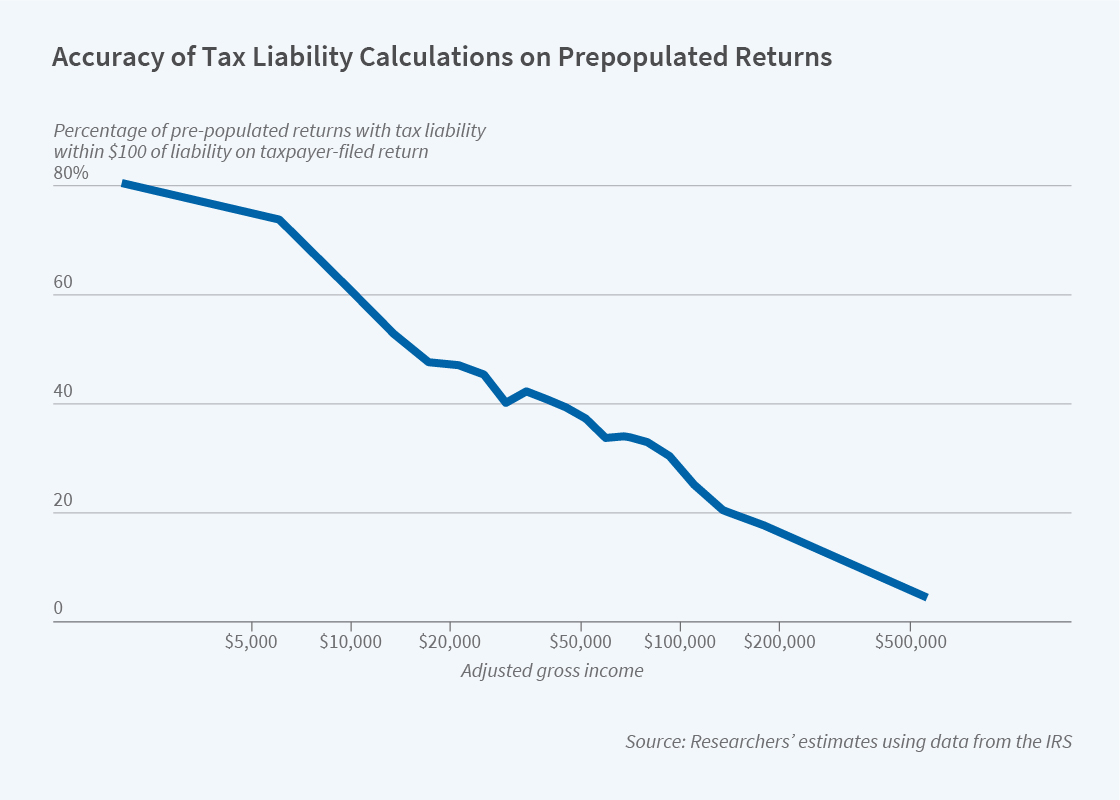 Prepopulation would be most accurate for taxpayers who are single, lack dependents, have no credits or deductions, and whose only income is wages under $100,000.

Prepopulation is particularly accurate for taxpayers who are single, lack dependents, have no credits or deductions, and whose only income is wages of less than $100,000. Around one-fifth of tax filers fit this description. The accuracy rate for this group is between 78 and 82 percent. Accuracy rates vary with adjusted gross income (AGI). For those with AGI in the bottom 15 percent of tax filers, below about $10,000, the two measures of accuracy are 61 and 80 percent. For those at the 65th percentile of AGI, around $60,000, accuracy rates are between 34 and 51 percent, and for those with AGI in the top 5 percent accuracy is lower still, between 10 and 30 percent. The decline in the accuracy rates for higher-income taxpayers is driven largely by increasing rates of itemized deductions, which cause a divergence between prepopulated and actual returns.

Among taxpayers who would have had an accurately prepopulated return, almost 45 percent used a paid preparer when filing. Even for those for whom the IRS could not fully complete a return, prepopulation could still yield significant time savings. Among the 52 to 59 percent of taxpayers with inaccurately prepopulated returns, the majority would need to make only one change — such as reporting self-employment income or deductions — or complete one additional schedule.

Prepopulation would affect nonfilers, those who did not need to file a tax return, as well as those who do. Of the 46.3 million taxpayer units that did not have a filing obligation based on income in 2019, 17 percent (8 million) were entitled to a refund. These refunds averaged $387. On the other hand, the researchers identify 8.8 million nonfilers who had a filing obligation. Fifty-five percent of this group (4.9 million) would have owed additional taxes if they had filed a return.