The Role of Multinationals in Propagating Economic Downturns 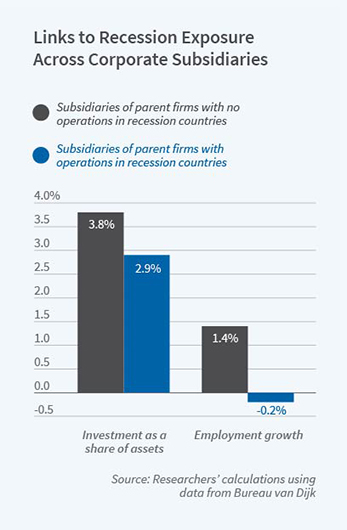 Nonfinancial multinational companies (MNCs) propagate economic downturns from one country to another through the network of their subsidiaries, according to an analysis of the experiences of more than 1,000 MNCs with over 10,000 subsidiaries in 23 countries during the 2008–12 period.

In The International Propagation of Economic Downturns through Multinational Companies (NBER Working Paper 27873), Jan Bena, Serdar Dinc and Isil Erel consider, for illustration, a hypothetical MNC headquartered in Germany with subsidiaries in both Spain and Finland. They ask how an economic downturn in Spain reverberates through the MNC to impact the subsidiary based in Finland.

The researchers find that if an MNC has a foreign subsidiary in a country that experiences a large downturn, the investment rate and employment growth in its subsidiaries in other countries are lower relative to similar subsidiaries of another MNC headquartered in the same country but without a subsidiary in the country experiencing the downturn.

The researchers offer two potential explanations for why economic downturns propagate via MNCs in this way. First, foreign subsidiaries within a single MNC are often linked by a supply chain. For example, a German steel subsidiary may supply a subsidiary manufacturing automobiles in France. In these cases, the strength of the effect depends on the direction of the relationship. Specifically, if the subsidiary in the country experiencing a downturn is “downstream” — if it is a customer to other subsidiaries of the same parent firm — then the effect is greater than if the subsidiary in the affected country is an upstream supplier.

The second explanation relates to access to finance. In this case, the propagation effect is stronger when the parent MNC is financially constrained, thus offering relatively low internal access to capital. This suggests that an economic downturn in the country of one subsidiary can tighten the constraints on a financially constrained parent, making it more difficult for its subsidiaries in unaffected countries to obtain the capital needed to sustain investment and employment. The researchers find this effect even when there is no supply chain relationship between the subsidiaries of the parent MNC.

The International Propagation of Economic Downturns Through Multinational Companies: The Real Economy Channel