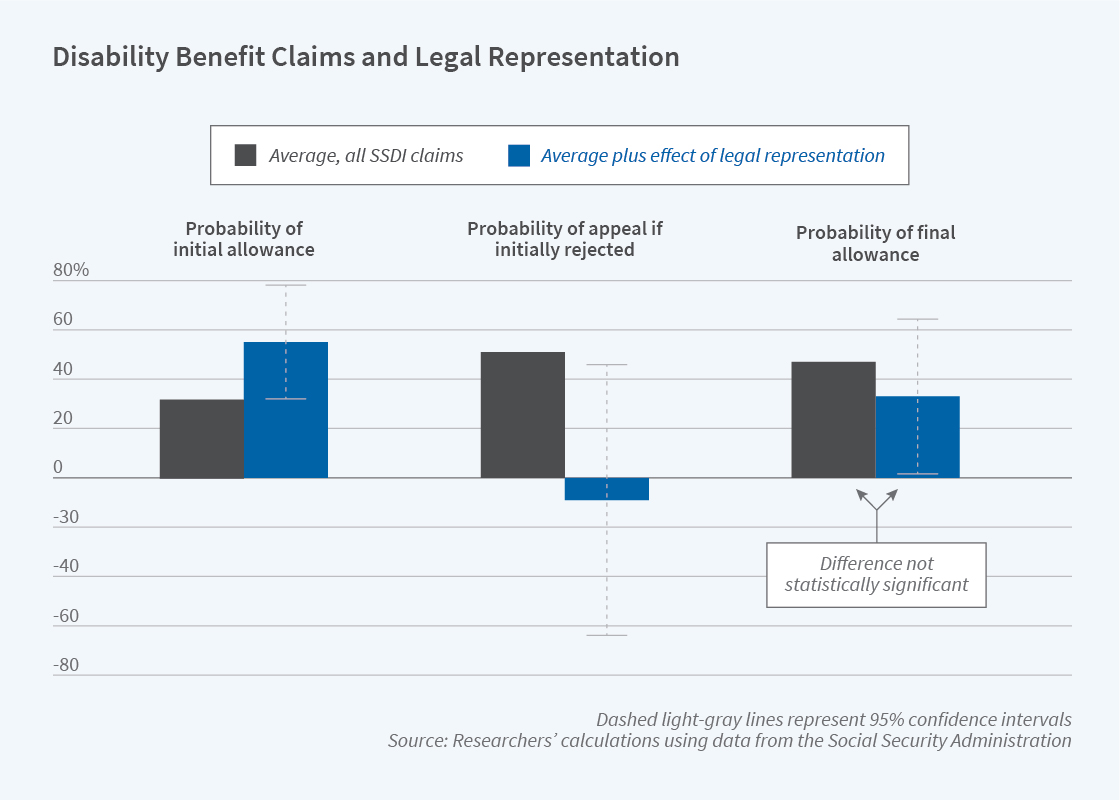 The process of applying for Social Security Disability Insurance (SSDI) benefits is complex. Applicants must complete a long application documenting their employment history, medical conditions, and medical treatments, obtain relevant medical records, understand the relevance of certain administrative rules and requirements, and in case of those who are denied benefits, navigate a lengthy appeals process.

Legal representatives have long played a role in SSDI cases at the appellate level, as cases reaching this level must be argued at a hearing before an administrative law judge. Disability representatives – primarily attorneys but also registered non-attorneys – work on a contingency-fee basis, receiving 25 percent of the claimant’s past-due benefits up to a maximum of $6,000. In 2019, fees to representatives totaled $1.2 billion. In recent years, representation has become more common during the initial review, perhaps surprisingly given that the probability of an initial award is low and back payments are small since decisions are rendered within weeks.

While disability representatives are widely perceived to prioritize their own interests above those of the claimant due to perverse incentives in the fee structure, little is known about the value of legal representation in the SSDI application process. Researchers Hilary Hoynes, Nicole Maestas, and Alexander Strand seek to address this gap with their recent study, Legal Representation in Disability Claims (NBER RDRC Working Paper NB19-Q8).

The authors find that legal representation increases the probability of initial allowance by 23 percentage points. Given the mean of 32 percent, this represents a very large effect. This effect is primarily driven by increases in allowances for automatically-qualifying medical conditions, rather than allowances meeting the medical-vocational criteria, and is particularly strong for applicants with mental impairments.

Perhaps surprisingly, legal representation leads to a 10 percentage-point increase in the probability of denial for insufficient evidence. The authors speculate that this could reflect representatives “cutting their losses” in cases where the medical and other evidence turned out to be less compelling than anticipated.

Applicants who had representation before the start of their initial review and received an initial denial are 60 percentage points less likely to file an appeal to the hearing level. This is a large effect relative to the mean appeal rate of 51 percent. Using a representative in the initial claim process leads to a decrease in the total case processing time of 316 days, as a result of having fewer appeals. There is no statistically detectable difference in the probability of a final allowance.

The authors conclude “representation facilitates a more efficient process – leading to more approvals at the initial stage and fewer approvals at the (more costly) appellate stage. They accomplish this by recognizing when an applicant’s medical condition meets the listing of impairments, and thus should be automatically qualified regardless of their residual functional abilities. Furthermore, legal representation in the initial stage appears to deter some applicants from pursuing their claims on appeal.” They note that representation in initial claims leads to a reduction in total processing time of a little less than a year while leading to no detectable change in final allowance rates. Finally, the authors estimate that the 15 percent level of representation at the initial claims level in 2014 generates a 13 percent reduction in SSDI processing costs compared to the counterfactual of no initial claims representation.

The research reported herein was performed pursuant to grants DRC12000002-05 and RDR18000003 from the US Social Security Administration (SSA), funded as part of the Retirement and Disability Research Consortium. The opinions and conclusions expressed are solely those of the author(s) and do not represent the opinions or policy of SSA, any agency of the Federal Government, or NBER. Neither the United States Government nor any agency thereof, nor any of their employees, makes any warranty, express or implied, or assumes any legal liability or responsibility for the accuracy, completeness, or usefulness of the contents of this report. Reference herein to any specific commercial product, process or service by trade name, trademark, manufacturer, or otherwise does not necessarily constitute or imply endorsement, recommendation or favoring by the United States Government or any agency thereof.