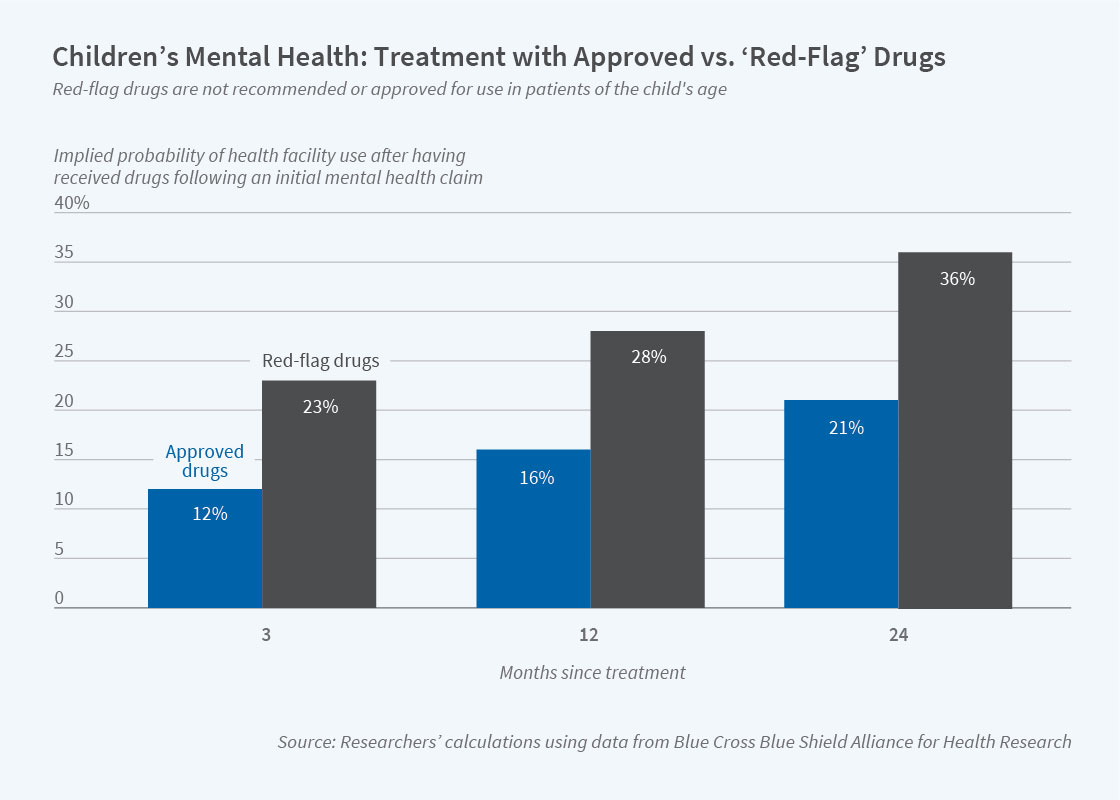 Do treatment guidelines encourage use of effective treatment or impede provision of personalized health care? In Rules vs. Discretion: Treatment of Mental Illness in US Adolescents (NBER Working Paper 27890), researchers Emily Cuddy and Janet Currie address this important issue in the context of mental illness among adolescents. They use claims data from the Blue Cross Blue Shield Alliance for Health Research to evaluate the effect of the initial treatment choice on outcomes over the first two years of illness.

The first episode of mental illness for an adolescent is a setting where guidelines may be especially valuable. With no patient history to influence the choice of treatment, physicians may be more likely to rely on guidelines at this stage. In addition, emerging mental illness is often treated by providers who do not specialize in psychiatry and may particularly benefit from the information conveyed by these recommendations.

The guidelines for treatment of emerging mental illness among children are clear. Psychiatric associations indicate that follow-up treatment should begin promptly after diagnosis. Treatment recommendations are, of course, specific to the illness. But, for the most common diagnoses, they include therapy, to be accompanied by a prescription medication if warranted. In most cases, there is wide agreement about the specific type of pharmaceutical intervention; for anxiety disorders and depression, for example, a trial of a selective serotonin reuptake inhibitor (SSRI) is generally recommended.

Estimated health care costs over the next two years are more than twice as high for those treated with a red-flag drug as for other patients.

Many other medications are not recommended for first-line treatment of mental illness among adolescents, due to concerns about efficacy, side effects, or dependence risk. Others are not approved by the Food and Drug Administration for patients in this age group. The researchers define “red-flag” drugs as those medications that are either not recommended for first-line treatment or not FDA-approved for this age group. When treatment follows guidelines, use of these red-flag medications should be rare for initial treatment episodes.

In practice, the data show that patients often receive care that is inconsistent with professional recommendations. Twenty-seven percent of adolescent patients receive no follow-up treatment. Among those who receive treatment, the most common form is therapy. But, of the adolescents who receive a prescription drug, 46 percent receive a red-flag medication. Given the considerable variation in treatment patterns, the researchers investigate whether outcomes are different when treatment follows guidelines.

Since initial treatment is not randomly assigned, a simple comparison of patients who do and do not receive red-flag medications would confound the effect of the red-flag treatments with other individual differences. To overcome this problem, the researchers focus only on the differences in initial treatment arising from local variation in practice styles. The analysis relies on the fact that two otherwise identical patients are predicted to receive different treatment if one lives in an area where providers tend to prescribe red-flag drugs for patients like them and the other does not.

One reason for the substantially higher health care costs among patients who receive red-flag medications is that they are at greater risk of hospitalization or an emergency department visit. The figure shows that patients who are prescribed red-flag drugs experience consistently higher rates of facility use than those whose treatment follows guidelines. This pattern of facility use implies that treatment that follows guidelines is either more effective at managing illness, or generates fewer serious side effects, or has both effects.

The findings suggest that treatment for adolescent mental illness that follows professional guidelines is more effective and less costly. “The results,” the researchers conclude, “provide support for the guidelines themselves, contributing to the ongoing controversy about `rules vs. discretion’ in medicine.”

The researchers acknowledge support from the NOMIS Foundation and Princeton’s Center for Health and Wellbeing.