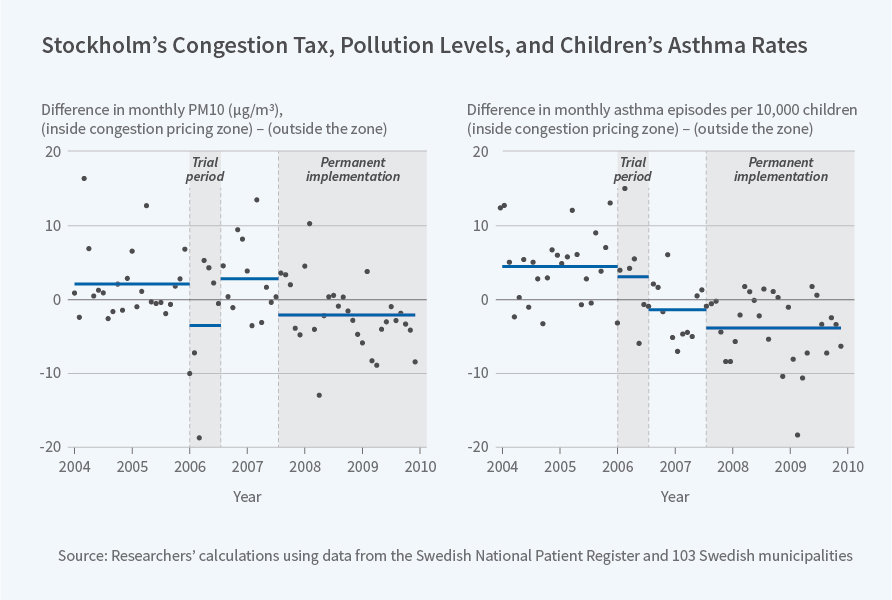 Traffic congestion is a serious problem in many cities around the world. While concerns about the effects of traffic on commute times, fuel consumption, and business activity often dominate the discussion, there is growing interest in the health effects of congestion.

Motor vehicle emissions are the leading cause of ambient air pollution in urban areas. Automobile exhaust contains a number of harmful pollutants, including particulate matter (PM10 and PM2.5), nitrogen dioxide (NO2), and carbon monoxide (CO). The medical literature has established that exposure to these pollutants has negative effects on lung development, asthma symptoms, and respiratory health. The effect of pollution on children's health is of particular interest because children spend more time being active outdoors and because childhood respiratory problems can cause permanent health deficits

Sweden offers a compelling context in which to study the health effects of congestion due to policy changes that affected congestion levels. Congestion pricing was first introduced in central Stockholm on a trial basis in January 2006. Vehicles entering the congestion pricing zone (CPZ) were subject to a fee of 0 to 2.6 U.S. dollars, depending on time of day, and fees were collected automatically using license-scanning technology. During the trial period, traffic in the CPZ declined by 20 to 25 percent. The trial ended in July 2006, but the government re-implemented congestion pricing on a permanent basis in August 2007.

To study the effects of congestion pricing on pollution levels and child health, the researchers obtain emissions data from ambient air monitors in Stockholm and other Swedish municipalities from 2004 to 2010. They also assemble data on hospital inpatient and acute outpatient visits by residents of these cities over the same period, identifying visits with a primary complaint of asthma. The researchers focus on children under age six due to the higher probability of acute asthma episodes in this population.

The researchers first show that congestion pricing led to lower levels of air pollution. Relative to other areas, levels of PM10 and NO2 in the CPZ area dropped during the trial, returned to pre-trial levels after the trial ended, and then fell again once congestion pricing was re-introduced. Ultimately, the decline in the levels of these two pollutants in the CPZ was between 5 and 20 percent.

The pattern with respect to health effects is somewhat different, with a drop in asthma cases in the CPZ area that grew larger over time, even when congestion pricing was not in place. Comparing the permanent policy era to the pre-trial era, asthma cases in the CPZ area fell by 8.7 per 10,000 children, a drop of nearly half the baseline rate. As the researchers note, their findings suggest "that congestion charges in large cities can have significant positive effects on health in the short-term, but even larger effects in the longer term as the stock of health evolves to a new lower-pollution equilibrium level. This finding is consistent with our understanding of health as a stock that often changes relatively slowly over time."

The researchers conclude by noting that the initial pollution levels in Sweden are well below the current U.S. EPA standards, suggesting "reductions in pollution from traffic can have large positive effects on children's respiratory health in many settings."

The researchers gratefully acknowledge support from Princeton's Center for Health and Wellbeing, the NIH, the Swedish Research Council, and IFAU (the Institute for Evaluation of Labor Market and Education Policy of the Swedish Ministry of Employment).