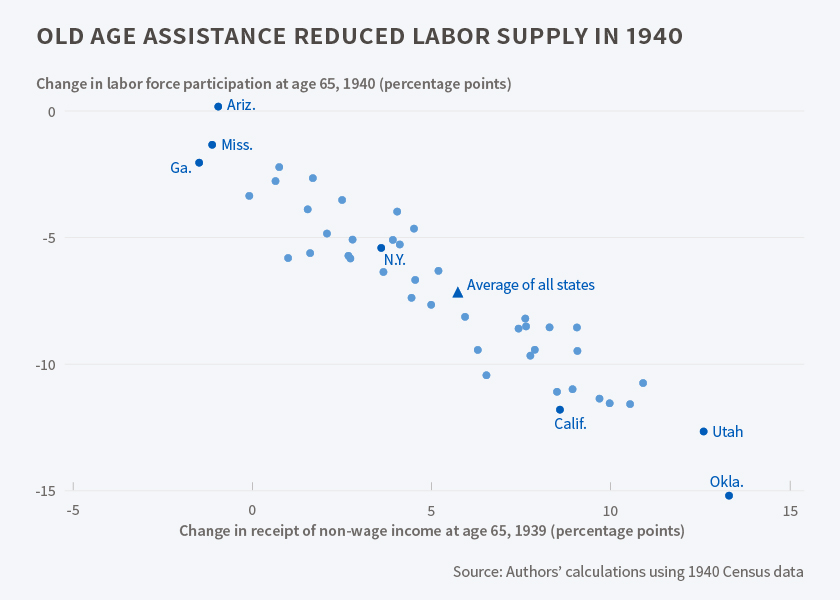 Old Age Assistance, a means-tested benefit program introduced during the 1930s, accounted for nearly half of that decade's decline in labor supply for men aged 65-74.

Whether government benefits discourage labor supply by individuals 65 and older, and if so by how much, has attracted research interest since the creation of such transfer programs. In Government Old-Age Support and Labor Supply: Evidence from the Old Age Assistance Program (NBER Working Paper 22132), Daniel K. Fetter and Lee M. Lockwood provide new evidence from a large program expansion during the 1930s. They exploit newly available census data from 1940, which cover a large sample—more than 6 million men aged 55-74—and also offer precise information on their places of residence.

Over the course of the 1930s, means-tested Old Age Assistance (OAA) was introduced nationwide for adults age 65 and over. In 1940, when Social Security was still in its infancy, 22 percent of Americans 65 and over received OAA.

The average annual OAA benefit in 1940 was $232 ($3,615 in 2010 dollars), which amounted to about a quarter of the 1939 median earnings for men aged 60-64. However, states varied widely in their eligibility standards and benefits, with the maximum monthly payout ranging from $15 to $45. The researchers use this disparity to estimate how benefit levels influenced workforce participation.

The introduction of OAA benefits led to changes in labor supply behavior precisely at age 65, and the changes varied substantially across states. For men aged 55-64, workforce participation patterns were similar across states. This pattern broke down for those 65 and older. States with more generous OAA programs experienced larger reductions in workforce participation. The researchers estimate that OAA programs reduced the labor supply of men aged 65-74 by 5.7 percentage points, or by nearly half the 1930-40 national decline for that age range.

As might be expected with a means-tested program, workforce participation declined most sharply among those with limited job prospects and less education. More than 40 percent of those who went on OAA had been jobless or employed in work relief programs that targeted individuals who otherwise would have been jobless.

Extrapolating from their OAA findings, the researchers estimate that the expansion of Social Security accounted for at least half of the increase in retirements between 1940 and 1960. They conclude that "government old-age support programs can have large effects on labor supply."