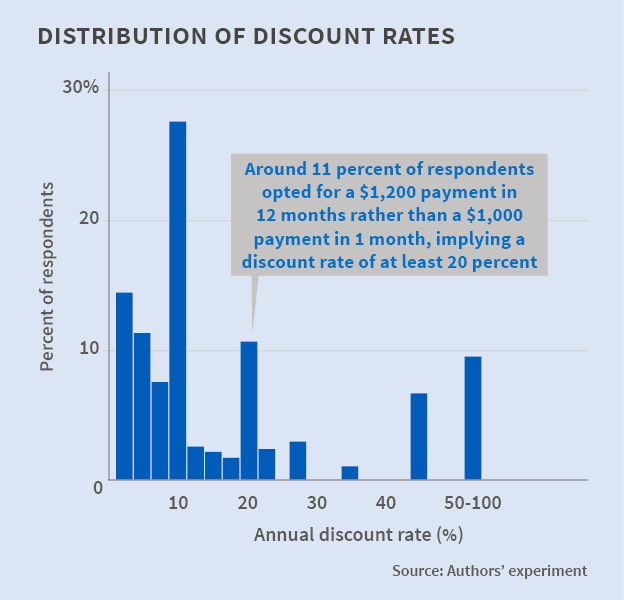 When shopping for appliances, consumers often must decide between the standard model and an energy-efficient model. The latter is typically more expensive but promises reduced operating costs for the lifetime of the appliance. The trade-off is between spending less now (with the standard model) and spending less later (with the energy-efficient model). Consumers' decisions depend crucially on their "discount rates"—the rates at which they discount future benefits when comparing them with present benefits.

Economists often measure the discount rate by asking "Would you rather have $1,000 today or $X in one year?" When the difference is relatively small, for example when X = $1,001, virtually everyone takes the $1,000 now. But what if X is larger? At some value, unless the decision-maker is presently experiencing a financial emergency, the survey respondent will opt for $X in a year rather than $1,000 today.

Using survey data on 1,200 U.S. homeowners, Newell and Siikamaki find substantial variation in the value of X that leads different consumers to choose the future payoff. Some are very patient and take the delayed benefit at low values like $1,020. Others are very impatient, requiring thousands of dollars to accept a one-year delay. About half of the sample chose the delayed payment when X was equal to $1,124. This implies that roughly half of the sample has a discount rate of 11 percent or lower. In general, respondents tended to have greater discount rates if they had less education, low income, low credit scores, and large households.

Having calculated individual-specific discount rates, Newell and Siikamaki then explore the relationship between patience and willingness to pay for energy efficiency. They find that lower discount rates, signifying greater patience, are associated with increased willingness to pay for energy efficiency. This holds even after statistically controlling for a range of potentially confounding factors, including age, education, ethnicity, gender, employment status, number of children, income, and geographic region.