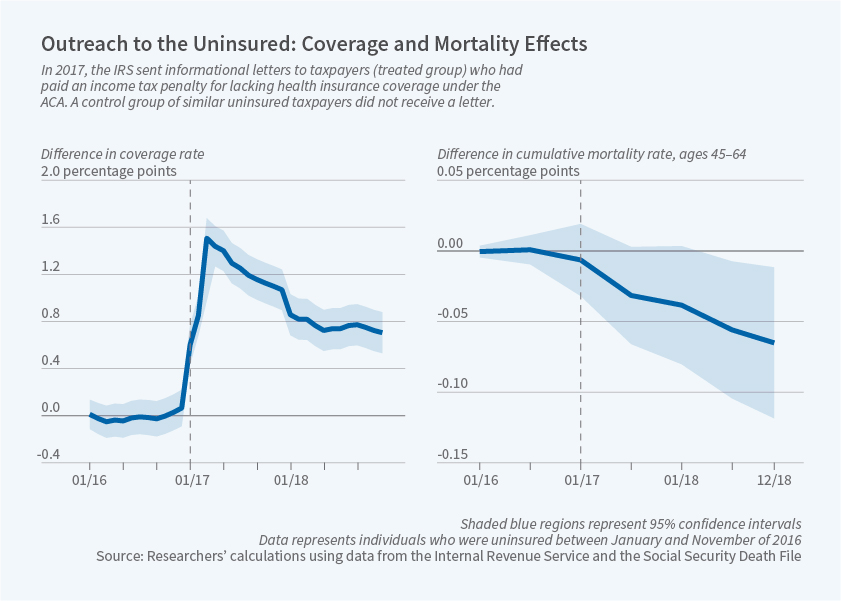 In 2015, five percent of households that filed tax returns paid a penalty for having at least one family member without health insurance as required by the Affordable Care Act. The tax penalty was intended to provide an incentive for purchasing insurance, but the incentive could have been muted if taxpayers lacked information about it. In Health Insurance and Mortality: Experimental Evidence from Taxpayer Outreach (NBER Working Paper 26533), researchers Jacob Goldin, Ithai Z. Lurie and Janet McCubbin evaluate how an informational letter about this penalty affected subsequent health insurance coverage and mortality.

Based on printing and postage costs, the researchers calculate that the IRS spent about $63 per year of induced insurance coverage.

Among those households that paid a penalty in 2015, the researchers randomly selected 3.9 million to receive an informational letter from the Internal Revenue Service (IRS) about how to avoid the penalty in the future. The letter had a question-and-answer format, addressing questions such as “How do I avoid the penalty next year?” and “How do I sign up for health insurance or get help finding a plan?” Another 600,000 households were randomly assigned to the control group that did not receive a letter.

The IRS sent the letters during the open enrollment period for 2017 insurance policies offered on state health insurance exchanges. To assess the impact of the letters, the researchers analyze administrative data from the IRS and the Social Security Administration, spanning two years after the letters were sent.

Due to the randomized assignment of letters, the initial characteristics of the treatment and control groups appear nearly identical. All of the households had paid tax penalties in 2015 as a result of uninsured family members. The average 2015 penalty was $528. Forty-three percent had also paid a penalty for not having insurance in 2014.

Overall, receipt of the letter was associated with a 0.85 percentage point increase in the likelihood that an individual had any insurance coverage in 2017, a 2.7 percent reduction in the rate of uninsurance relative to the control group’s 31 percent rate. Increases in insurance coverage persisted through the subsequent two years. Based on printing and postage costs, the researchers calculate that the IRS spent about $63 per year of induced insurance coverage.

Among those in the control group who lacked insurance for some portion of 2016, the majority remained uninsured in 2017. As the first panel of the figure shows, the letters increased insurance coverage by 1.3 percentage points for this group, reducing uninsurance by 2.9 percent relative to the control group’s 52 percent rate. Individuals between the ages of 45 and 64 experienced the largest increase in coverage within this group — 2.1 percentage points. Most of the increase in coverage was through policies that were sold on the state health insurance exchanges.

The researchers also examined whether the changes in insurance coverage induced by the letters had any impact on mortality over the next two years. Among those who experienced the largest increases in insurance coverage — middle-aged individuals who had remained uninsured through 2016 — receipt of the letter improved health outcomes. As shown in the second panel of the figure, mortality for this group fell by 0.06 percentage points over the two years following the letter, a 6 percent decline relative to this group’s average two-year mortality rate of 1.01 percent.

If all of the difference in mortality for the treatment group is attributable to their increased insurance coverage, then an additional month of insurance coverage for this middle-aged, recently-uninsured group is associated with a mortality decline of 0.16 percentage points. The researchers note that this finding may not generalize to younger or more recently insured populations. In particular, they hypothesize that the first months of coverage following a spell of uninsurance may have a larger effect than subsequent months of coverage.

The findings suggest that informational outreach can help overcome issues that reduce the effectiveness of the tax penalty — such as inattention or lack of information among taxpayers — and thereby increase insurance coverage. The increased insurance coverage, in turn, can improve health outcomes.