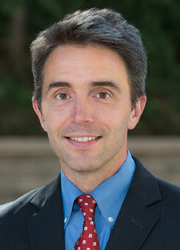 Mark Duggan is a Research Associate of the NBER's programs in health care, public economics, and education.

Duggan is a Professor of Economics at the University of Maryland. Prior to joining the Maryland faculty in 2003, Professor Duggan served for four years as an Assistant Professor in the University of Chicago's Department of Economics. He has also held positions as a visiting fellow at the Brookings Institution and as a Visiting Assistant Professor at the Massachusetts Institute of Technology. At Maryland, he has won awards both for his graduate and for his undergraduate teaching.

Duggan was a Fellow of the Alfred P. Sloan Foundation and is the recipient of research grants from the National Science Foundation, National Institutes of Health, Social Security Administration, and Robert Wood Johnson Foundation. He is a research associate of the Maryland Population Research Center and an Adjunct Associate of the Stanford University Center for Health Policy. His research has appeared in leading economics journals, including the American Economic Review, the Journal of Political Economy, and the Quarterly Journal of Economics.

Duggan is an Associate Editor of the Journal of Public Economics and serves on the Editorial Board of the American Economic Journal: Economic Policy. He served as a member of the Social Security Administration's Technical Advisory Panel for Modeling the Effect of Social Security Reform on the SSDI Program.

Professor Duggan holds a Ph.D. in Economics from Harvard University and an M.S. and B.S. in electrical engineering from the Massachusetts Institute of Technology.

Professor Duggan's current research focuses on theoretically modeling and empirically estimating the effect of government expenditure programs such as Social Security, Medicare, and Medicaid on the behavior of individuals and firms. For example, one branch of his research focuses on explaining the rise in the Social Security Disability Insurance rolls, which he attributes in part to rising female labor force participation, the increase in the Social Security full retirement age, and changes to the Disability Insurance program. In other work, he has examined the effect of changes in the Medicaid and Medicare programs on health care spending and health outcomes.

In his spare time, he enjoys spending time with his wife and two young children, running, and following the Red Sox and other Boston-based sports teams.